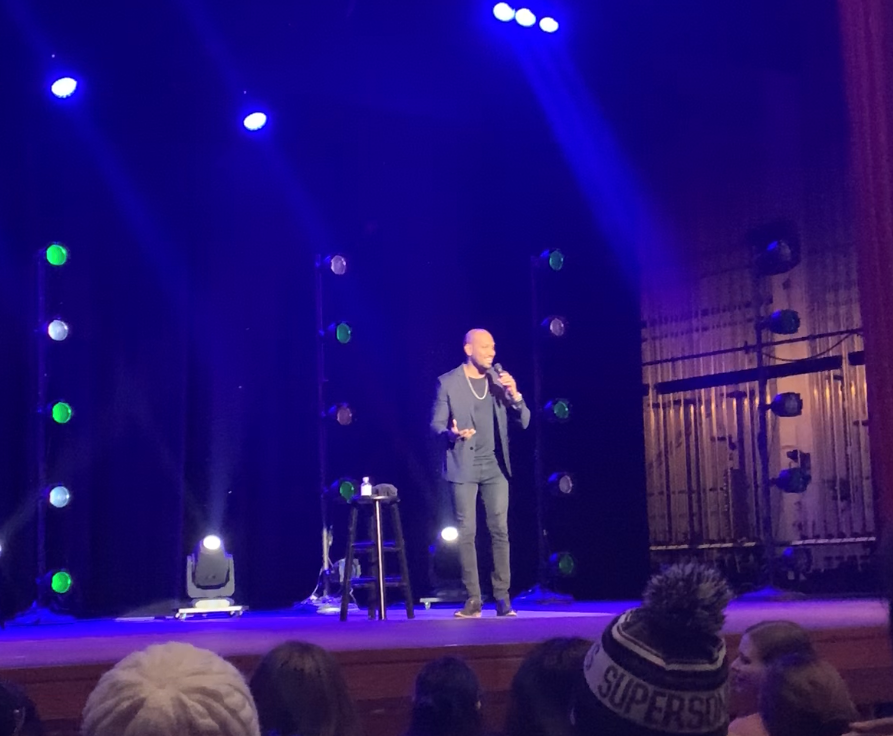 The speech began interactive and playful, with his intent to keep the audience engaged. His challenge for junior Sarah Klein, Events Coordinator for MSG, was to nonchalantly read a sentence backwards during the introduction, which kicked things off in a light and airy way.

He soon turned to one of his many talents by rapping one of George Washington’s opening songs from the Broadway show “Hamilton.” Clark replaced “Hamilton’s” original Washington, Christopher Jackson after he left the tour.

Following his playful welcome, he quickly dove into the message he wanted to leave the students with. This message was “be your most authentic self.”

Clark encapsulated this by telling his life story and how it got him to where he is today. The story began with his claim to a life of show business. It was rooted in the support he received from his mother, an educator and avid supporter of the homeless.

Clark then turned to highlight a troublesome portion of his childhood, the drug dealing undertaken by his father. The balance of good and bad in his life forced Clark to grow up quickly. He witnessed an unhappy home, a disappearing and addicted dad, and he took the lead on admitting something needed to change.

Following this painful time, he went silent. Clark shared that he could only be heard singing in gospel choir. The difficulties led him down a path to education. It began in a Baltimore art program, where involvement gave him a new passion.

“That passion was to be an actor, where I could play all the roles I dreamed of playing,” Clark said. Of course, this led to a joke with the audience, considering he hated musical theater, and yet ended up starring in “Hamilton.” He did not turn around to the art until he saw the musical “Rent.”

Education was not a smooth process. He skipped college classes for auditions, and transferred colleges several times to find the perfect fit. He reminded the audience that, “just because I skipped, doesn’t mean that my grades weren’t upheld.”

Following undergrad, he journeyed to grad school, which was quite the eyeopener for Clark. He shared that the support for applying to Ivy League schools was not there because of his race. Professors said he would be a ‘token’ student.

While applying for Yale and NYU, Clark received several callbacks kickstarting his acting career. Rather than taking these roles right away, he pursued education. It was attending Yale that brought the weight of this decision into focus.

“We humans are the only being on earth to override our instincts with our mind. Purpose is your reason why, and I love that,” Clark said. Shortly after finding his purpose for acting, Clark was thrown onto a new path due to the status of the economy. Unable to find steady work, music was the answer.

He lived day to day until a shot arose. This shot was working towards the role of Marvin Gaye in “Motown: The Musical.” That is when another hardship crashed into Clark’s life. His cousin was shot and killed moments before he was to run through “Motown’s” first performance. The most important advice he received that night was to start with his cousin’s sons in order to right the wrong that had been done. Balancing music and acting, Clark’s life became a rush of work.

A rekindled relationship with his father taught Clark yet another lesson—to keep pushing. His father went to rehab 22 times for his addiction, only to learn there was a chemical imbalance causing his issues. Although Clark was ready to give up, his father’s perseverance led Clark to attend a sixth call back for “Hamilton,” which led to his role as George Washington.

His experiences led to the creation of his initiative inDEFINED. The brand encourages the concept of being who you are inside, and being your most authentic self. Clark left the audience with a few parting words.

“Life is this journey. It’s just a road and when you feel lost, tap back into your passion.”

Clark also hosted a masterclass earlier in the day for members of the Mercyhurst Theatre Club. He gave advice in specific instances of performing and on the acting profession overall. He shared several of his favorite acting exercises with the enthusiastic group.

It was important for Clark to stick with his most authentic self. He did not allow the hardships, criticisms and pain determine who he was. Instead he tapped into his passion and found where he was meant to be and what he was meant to do.