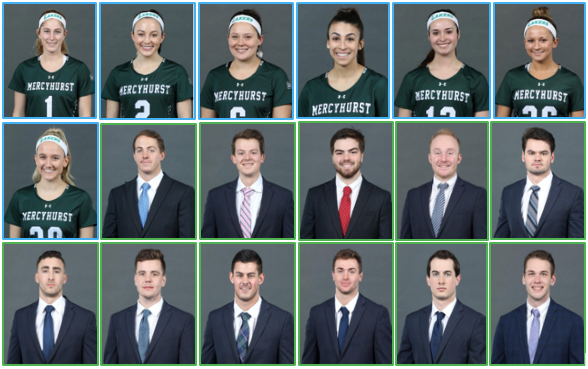 Senior Games of each season recognize Senior athletes for their effort and dedication. With the COVID-19 crisis, spring Senior athletes everywhere lost this event and countless opportunities to play. Despite these circumstances, the Mercyhurst community and the Merciad want to recognize these Lakers. This week we celebrate lacrosse, a classic spring sport.

Congratulations to all the following Seniors. We are proud to say you represent Mercyhurst University!

An attacker from Auburn, New York, Netti had a solid playing career for Mercyhurst. She started in all 20 games her junior season, leading the team with 53 assists and scoring 30 goals. Netti played and started in almost every game throughout her career and was a leader on the team.

Her favorite team memory is last season’s Senior Game when the team beat East Stroudsburg University (ESU), ending on a high note and an evening full of festivities. Netti plans to attend Physician Assistant school after graduation. She wishes her parents, Julie and Jack, her brother Matt and her sisters Claire and Caroline Netti could have shared Senior night with her.

Originally from Williamsville, New York, this attacker led the team with 62 goals her junior season and started all 20 games. In one game alone, Hubert had eight goals out of nine shots. As her career advanced, she played in an increasing number of games, starting in many in her sophomore season.

Hubert said that the overwhelming support from families after every game and getting to know her team over the past four years are her best lacrosse memories. She will finish her remaining CPA exams this summer and work as an Audit Associate for Freed Maxick CPAs in Buffalo. Hubert would have shared her Senior game with her parents Mike and Holly, her brother Michael Hubert and her grandparents Ron and Jill Meier.

A defensive player from Watertown, New York, her junior season consisted of 20 starting games where she led the team with 83 groundballs. Kolb was also known as the draw control specialist on the team. She played in every game for Mercyhurst, starting all but one. She accumulated a total of 158 groundballs and 96 draws in all.

Kolb remembers the victory against ESU last season as the highlight of her lacrosse career. She will move to Buffalo with friends after graduation and find a job in the graphic design field. Kolb wishes she could have shared her Senior game with her parents and brother, Chad, Vicky and Caleb Kolb.

An attacking player from Victor, New York, who started in 18 games last season and had the second highest number of assists, Fosco also had double goals in five games. Fosco played in 35 games, started 22 of them and scored 24 total goals.

Fosco says PSAC and NCAA tournament opportunities stand out to her, but just enjoying every moment with her team is the best memory of all. Lacrosse memories are ones that she will carry with her through life. She will be obtaining a master’s in Criminal Administration at Mercyhurst University. Fosco wishes her parents, sister and grandfather could have escorted her on Senior day.

A defensive player from East Amherst, New York, Reeves had the chance to play in two college games with her team.

She is unable to choose  one memory because all of them were essential to her college lacrosse experience, especially  making friendships that will last forever. After graduation, Reeves will work on special investigations with a government agency. Her ideal Senior game would have been shared with her mother Michele, her father Shannon Reeves and her stepfather Tom Adams.

Originally from Rocky Point, New York, this defensive player started all 20 games last season racking up 15 groundballs and 11 turnovers. She played in 38 games overall with 33 groundballs.

Shanahan says the lacrosse team is her second family, and every memory with them was a great one. She is so grateful for her time as a Laker. She will go on to post-graduate education at the University of Buffalo School of Social Work. Shanahan would have shared her Senior game with her mother, father and sister, Sherin, Dennis and Caitlin Shanahan.

A Lancaster, New York native playing an attack position, Hagen had four starting games her junior season and 11 game appearances. She scored four goals and had eight assists. In her entire Mercyhurst career, she saw 16 games, six goals and 10 assists.

Hagen claims that the adversity and successes she faced with her team are her greatest memories, yet she still has many more to make with this team even after graduation. She will be at Canisius College in the Fall to start her master’s in Differentiated Instruction. Hagen wishes she could have shared her Senior recognition with her parents Cheryl and Jerry, her brother Ryan and her grandparents Florence and John.

Hailing from Canandaigua, New York, Smith-Wilcox had a stellar junior season starting in all 17 games. He had 29 goals and 22 assists that season as well as nine multi-goal games, including one with four goals. Wilcox had a total of 33 goals over the 23 games he played in during his Mercyhurst career.

A defensive player from Orchard Park, New York, Looney played in four collegiate games, getting to start in one of them. He will graduate in May with a degree in Criminal Justice.

Looney’s favorite lacrosse memory is the bus ride home after winning the GMAC Championship against Seton Hill and getting to represent Mercyhurst at home in the National Playoffs North Regional Tournament. With his degree he plans to go into state or federal law enforcement. Looney would have shared his Senior game with his mother and father.

This midfielder from Watertown, New York had 11 game appearances his junior season, scoring one goal and performing two assists. Robare scored four goals in his 17 game appearances for Mercyhurst.

The highlight of his Lacrosse experience was winning the GMAC against Seton Hill. Robare has accepted a position in Buffalo as a financial advisor. He wishes he could have shared his Senior game with his parents Leslie and Mike and his brother and fellow teammate Joel Robare.

Emerson plays as goalie and comes from North East, Pennsylvania. Emerson appeared in three collegiate games in his time at Mercyhurst, picking up one groundball for the team.

He will always remember winning the conference tournament (GMAC) against Seton Hill. Emerson will remain in the Erie area as a financial advisor and a high school lacrosse coach. He wanted his parents, who supported Emerson’s career every step of the way, to escort him on Senior day.

Originally from Hamburg New York, Wittmeyer saw time in all 17 games his Junior season, starting four of them. He racked up 22 groundballs and four goals out of 10 shots. Career-wise, Wittmeyer played in 25 games, had 24 groundballs and 6 goals. He is also awarded with a Second Team All-American title for DII Lacrosse.

From West Falls, New York, Vargo had a successful junior season with 11 games and 11 groundballs. He played in 16 games total over his career. Vargo will earn his degree in Biology.

Hailing from Rochester, New York, Sale saw time in all 17 games of his Junior season. Overall, Sale started in 12 games, had one goal in three shots and scooped up 24 groundballs. He will earn his degree in Intelligence Studies.

Originally from Hamburg, New York, Agate started all 17 games in his junior season. He was also fourth on the team with 35 groundballs. During his career, Agate played in 37 games and racked up 43 groundballs. He was also named in the Second Team All-American for DII Lacrosse. He will earn his degree in Pre-Physical Therapy.

Agate’s most memorable moment was wining the GMAC against Seton Hill and going to the National Playoffs afterwards. He will attend D’Youville College next semester to begin his Doctorate in Physical Therapy. Agate would have been escorted by his parents Sheri and Michael and his sister Allison Agate.

Originally from Bellingham, Washington, Lorenz saw 16 collegiate games in his career at Mercyhurst. Lorenz finishes with six groundballs, five goals and one assist.

The highlight of his career was winning the GMAC championship last season. Kritkausky will attend Canisius College to work toward an MBA in Investment Analysis. He would have shared his Senior game with Anthony Kritkausky and Jennifer Kuracina.

The highlight of Wtulich’s career was winning the GMAC in 2019. He will remain at Mercyhurst for his master’s degree. Wtulich wishes he could have shared his Senior game with his mother Laura and his sister Julianne Wtulich.