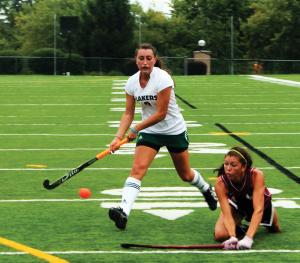 Jill Barrile photo: Senior defender Serena Slattery has provided experience and steady play for the young Lakers. She was named to the PSAC West first team as a junior.After being ranked 10th in the womensfieldhockey.com poll, the Mercyhurst field hockey team suffered a tough loss in double overtime against Indiana University of Pennsylvania. This is the second time this season a loss has come in overtime to IUP.

However, Coach Stacey Gaudette has no doubt in her mind that the team can easily bounce back. “We can learn from the loss to IUP. It was a phenomenal effort,” she said.

Prior to the loss, a huge win came over Slippery Rock at home in a shutout.

However, the overtime loss made a statement to the entire Pennsylvania State Athletic Conference (PSAC). The Lakers showed they can hang tough with any competition.

“The OT loss was pretty upsetting,” said Senior Rachel Sluberski. “But, we proved that we match up well with the powerhouse teams.”

Gaudette also thinks the team can do some real damage in the West. “The West is our primary goal and we have been there before, we just need to get back there. We are ready to make a statement,” she said.

Getting out to an even 2-3 start in the PSAC West and 4-5 overall, momentum will continue to build from here. The Lakers are led by a freshmen trio of Marissa Faso, Blair Pembleton and Katelyn Heitzhaus who have all had three goals apiece this season.

Coach Gaudette agrees that this freshmen spunk has lifted their team.

“We have some strong newcomers, and when we combine that with the experience it has been great. We had a strong camp and look to get better,” said Gaudette.

Leadership has been rooted in the Lakers’ senior class. The group of five seniors, Ashley Wiskup, Serena Slattery, Sluberski, Vicky George and Katie Erbacher have been the force behind the Lakers’ success thus far. This experienced group has made the gap smaller between the Lakers and newcomers, leading the team to victory.

Wiskup has seen the most time in goal this year. Starting in all eight games, she has saved 55 shots for a .753 save percentage.

The Lakers travel to East Stroudsburg University on Sept. 30.