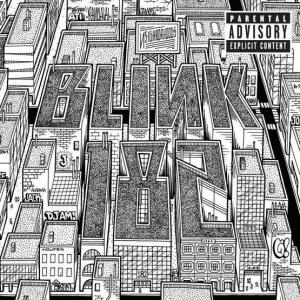 rockdirt.com photo: ‘Neighborhoods’ is Blink 182’s first album since 2003.The hiatus is over. Blink is back. After eight years of speculations and indefinites, Mark, Tom and Travis have once again returned as Blink 182.

Their sixth album, “Neighborhoods,” has raised the hopes of the large fan-base of the faithful, easily making it one of the most anticipated releases this year.

Upon first listen, it is clear the band has matured past the goofy teenage-angst ditties that made up the majority of their earlier work. More developed lyrics and less pop-punk melodies account for this.

It is also quite apparent many of the tracks have a musical influence from Tom’s ongoing side project, Angels and Airwaves. There are pronounced synth melodies along with intermittent ethereal vocals much akin to AVA.

This isn’t to say that Blink has completely lost their old sound—the new groove is more of a hybrid of the two groups.

The single off the album, “Up all Night,” is a perfect example of this. It seems the band was attempting to hearken back to the old days with drastic guitar rifts, yet the lyrics are mature in content and the chorus sounds eerily similar to AVA’s “The Flight of Apollo.”

The track is a solid one, just like much of the album.

While “Natives,” “After Midnight,” “Kaleidoscope” and “Mh 4.18.2011” are all top-tier tracks on the album, “Ghosts on the Dance Floor” is definitely the best song.

The emotive expression behind the lyrics is simple but powerful. Basically Tom recalls someone who he has lost and how the tangible memory of them continues to haunt.

The beauty of the song is its flexible ambiguity. Listeners can easily morph the lyrics into their own experience, whether it be the passing of a loved one, a broken relationship or another painful circumstance.

At some point we all can resonate with the key lyrics: “I saw your ghost tonight/The moment felt so real/If your eyes stay right on mine/ My wounds would start to heal.”

The disc is definitely up there with the other material Blink has released, albeit different.

If you were expecting the “same ol’ Blink” for their long-awaited endeavor, then you will be somewhat disappointed. The band has evolved into a more mature sound in its old age.

This does not take away from the fact that the album is still chock full of good tracks. If you are willing to accept the fact they have changed, “Neighborhoods” is a worthwhile listen.