The second installment of the Exploring Gender and Relationships series brought Monica Biernat, Ph.D., to Mercyhurst College on Thursday, Sept. 22.

She lectured on “Gender Bias in Evaluations: Complexity and Subtlety in Patterns of Stereotyping and Prejudice.” 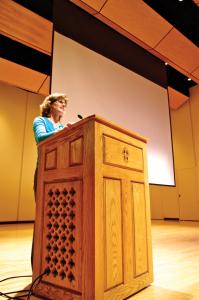 Zach Dorsch photo: Monica Biernat, Ph.D., spoke about the negative bias and stereotypes of women in academia and the workforce.

Biernat is a social psychologist from the University of Kansas whose specialty is stereotyping and prejudice.

Biernat began with the idea that some biases are subtle but “can color the way we think of men and women.”

She then led the audience through what she called a “gender stereotyping tour” and made sure to stress throughout her lecture that in all of the examples she gave and research she presented, it was not only males who stereotyped and showed prejudice—women were (and are) just as guilty in both of these categories.

“Both men and women show this bias,” she said.

Most of Biernat’s examples had to do with the academic world or the workplace, and she said that “there is more negative information recorded for women in the workplace” because the workplace is so masculine.

She gave a case where researchers had two resumes that were identical, except for the names—one was male and one was female. There were also two job descriptions that were the same except for the job title—one said chief of staff and one said executive secretary.

Another example Biernat presented had to do with female professors and how they are critiqued by their students.

Biernat explained that when students perform poorly in class they are more likely to blame the female professor.

However, if it were a male professor, students would place the blame on themselves.

“This is another interesting pattern of bias,” Biernat commented.

After giving numerous examples of stereotyping and bias, Biernat addressed what the average person can do about gender bias.

“There are some things we can do to reduce stereotypes,” she said. “Positive imagery that can motivate us to not be prejudiced can help, as can self-correction, awareness and self-consciousness. There has to be an increased accountability for decisions, and beliefs, norms and associations have to change.”

Ultimately, though, “What people see in the world around them influences their perception,” Biernat concluded.
Junior Kristen Robson thought Biernat was very informative. “Learning about studies and how they are done was helpful—now I have a general idea of what I’m going to do in my life,” she said.

The next event in the series is the showing of the film “Philadelphia Story, 1940” on Monday, Oct. 24, at 7 p.m. in Taylor Little Theatre.