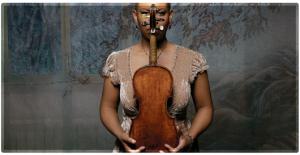 Regina CarterAn engaging sound is about to arrive at the Mary D’Angelo Performing Arts Center at Mercyhurst College – the sound of acclaimed jazz violinist Regina Carter.

Lauded as “wonderfully listenable, probingly intelligent and, at times, breathtakingly daring…taking the listener into the future of jazz,” by Time magazine, Carter is known for her interesting combination of the African Diaspora and more standard jazz sounds.

Regina Carter first pursued a career as a jazz violinist against the wishes of her parents, who were concerned for her financial future.

She earned a Bachelor of Arts degree in Performance with a double major in classical music and African American music, studying at both the prestigious New England Conservatory and Oakland University.

She then forged ahead with her career, carving a path for herself within a difficult field.

Among her many varied accomplishments, she was the first jazz musician and African American to play the Guarneri del Gesu, the renowned violin owned by Nicolo Paganini, and she played alongside jazz legends like Ray Brown and Dr. Billy Taylor, and popular musical icons Dolly Parton and Billy Joel.

Carter is known to give riveting performances and has ambitious national and international touring schedules.

Since her arrival on the music scene, Carter has had success that shows no indication of ending.

The album “Reverse Thread,” a collection that offers a contemporary interpretation of African folk music, is Carter’s newest work.

This album is set to be released in 2010 and will feature the talents of accordionist Will Holshouser, kora player Yacouba Sissoko, bassist Chris Lightcap and percussionist Alvester Garnett.

When asked about the upcoming performance, Music Department Chair Louisa Jonason said, “Regina is a jazz artist, although classically trained. I look forward to hearing her.”

“Talented violinists really impress me because the violin is so hard to play,” junior Leah Kroll said when discussing Carter.

The performance is Friday, Oct. 2 at 8 p.m.
Tickets are available at the PAC box office or by calling extension 3000.

Tickets are $15 with a Mercyhurst student ID.

More information on Carter and her accomplishments is available at reginacarter.com.