Mercyhurst College students will soon be able to scratch “attend a Buried Life event” off their bucket list.

As part of the Distinguished Speaker Series, Mercyhurst Student Government (MSG) will bring the cast of “The Buried Life” to campus.

“It’s really exciting this year that we have a well-known speaker coming in,” MSG PR Coordinator Jeremy Dickey said. 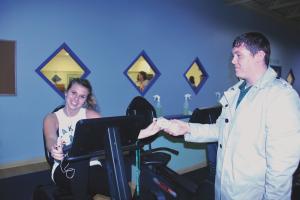 Jill Barrile photo: Freshman Alexa Lucente was working out when MSG passed out bottles of water on Sept. 19.

For those who don’t know, “The Buried Life” is a MTV reality documentary series about four men from Canada who travel across North America working on completing their list of the 100 things they want to do before they die. Each time they complete an item off their list, they help a stranger complete a goal.

When picking this year’s speakers, MSG tried to base their decisions on their theme— “This is Reality.”

“The theme, ‘This is Reality,’ kind of came about on a whim,” said Dickey. “It’s about living in the now and taking control of your situation and realizing actions that you do now will affect you in the future.”

The theme also focuses on helping out others and paying it forward, Dickey said.

“The Buried Life” is one event “we saw all around that would benefit students and tied in with our theme,” Dickey said.

“The Buried Life’s” speech is titled “What do you want to do before you die?” As part of their motivational speech, they will discuss their bucket list.

The event is free and starts at 8:15 p.m. on Tuesday, Nov. 8, in the Mary D’Angelo Performing Arts Center.

“I think it will make for good PR for the school because they are so well known. I think it’s going to be a big hit, and I’m looking forward to it,” she said.

MSG plans to carry the “This is Reality” theme through this year’s events, but as of now, none of the scheduled events relate to it. Dickey said he hopes to incorporate the theme with the Christmas tree lighting ceremony on campus and the second speaker in the Distinguished Speaker Series.

In the past, MSG has brought between two and five speakers to campus each year. Dickey said he thinks this year MSG will have two speakers.

The second speaker is likely going to be a chef.

Dickey said MSG wants the chef to be a collaborated event like Chef Dominica’s talk. Last year, when she spoke on campus, there was a wine tasting for students who were at least 21 years old, and students participated in an Iron Chef event where they had a cooking competition.

“Nothing is signed, so it could totally change,” Dickey said.

To portray this year’s theme to students, MSG passed out bottles of water to students at the Mercyhurst Recreation Center on Monday, Sept. 19.

The water bottles had a piece of paper on them that said, “Kindness like a boomerang always returns.”

MSG President Meghan Hess explained why they passed out bottles of water.

“We really want to portray this theme of ‘This is Reality,’” she said. “We think it will be a good way to show students what MSG is really about.”