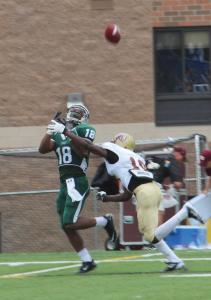 Jill Barrile photo: Senior receiver Trevor Kennedy has been a lightning rod for the Lakers’ offense. He has over 200 all-purpose yards in each of the last three games, a trend that will hopefully continue.“For every star, there is a turning point in his or her career when everything clicks.

At the time it didn’t seem like much, but an 11-yard reception during a 49-14 blowout of Lock Haven in 2008 was just the beginning for senior Trevor Kennedy.

Since that game, Kennedy has been working toward being the best player on the field.

He followed up the unassuming 11-yard season total from 2008, with a 434-yard and two-touchdown campaign during his sophomore year. In one season, Kennedy went from freshman after-thought to the team’s number two receiver.

With more than 1,907 receiving yards, 2,770 all-purpose yards and 24 touchdowns, Kennedy is arguably the most feared offensive weapon in the entire Pennsylvania State Athletic Conference (PSAC).

“Teams try to force me out of the game, but I need to do everything in my power to put my stamp on the game,” Kennedy said.

So far, his senior season is full of stamped games, despite the lack of an experienced receiver or running back to take pressure off him. Coming in to the season, there was a suitable sidekick in sophomore Terrence Coon. However, after being ruled academically ineligible, experience was suddenly thin.

“It was scary initially, but it’s football,” Kennedy admitted.

There was one key member returning for the Lakers this season, redshirt senior quarterback Travis Rearick. With Rearick at the helm, Kennedy has enjoyed his most productive seasons.

Of Rearick’s 1,191 passing yards, 538 have gone to Kennedy. At the pace these two are at, Rearick is on his way to tallying more than 3,000 yards, with Kennedy eclipsing 1,400 yards receiving.

Kennedy and Rearick have helped the Lakers to a 3-1 record to start off the season, thanks to an offense that averages 34 points per game.

For opposing coaches, the Lakers offense is enough to keep them up at night. This isn’t even their worst nightmare. Trevor Kennedy also returns kickoffs and punts.

He averages 41.9 yards per kick-off return, including a 90-yard score against Lock Haven. On kicks and punts over the last two seasons, he has totaled 766 yards and three scores.

Despite the statistics, Kennedy remains grounded about his success.

“When it comes down to it, it doesn’t mean anything,” Kennedy said. “No one player wins the game, but it’s always all or nothing.”

Following his PSAC West Offensive Player of the Year season, Kennedy is gunning for the Harlon Hill Trophy. The Harlon Hill award is Division II’s version of the Heisman trophy.

Kennedy is also looking to add another PSAC West ring to his other hand during the 2011 season.

“My main goal is to win the PSAC, but we still have work to do,” Kennedy added.

Next up for Kennedy and the Lakers is archrival Gannon. Last season, Kennedy was held to only 37 receiving yards and a touchdown against Gannon.

Dating back to 1991, the Lakers are 9-4-1 against Gannon, but they didn’t face each other from 1998-03. Hopefully, the Lakers can continue their dominance in the series and redeem last season’s 14-10 defeat.

The Lakers take on the Golden Knights on Oct. 1, at 1 p.m. on Tullio Field.