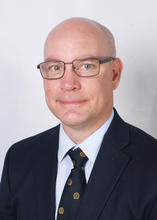 Mercyhurst University has welcomed Karl Pontus Krohn, an assistant professor in the Intelligence Studies department. Born and raised in Stockholm, Sweden, Krohn has lived many places around the United States due to his military commitment, including Virginia Beach, Kansas, San Francisco, Rhode Island, and now Erie.

Krohn’s interest in the intelligence field came from his time in the Swedish military. In Sweden, every male must serve in the military for at least one year. As Krohn served, his love for the field only grew. In 1993, Krohn graduated from the Swedish Naval Academy and from Stockholm University with a degree in International Relations.

Krohn has had an outstanding career while in the military. First, while a part of the European Union Naval Force, Krohn served on TaskForce 465 during Operation Atlanta. Second, Krohn ranked as a Naval Officer in the Swedish Armed Forces. Lastly, while at the Swedish Defense University, he acted as an adjunct faculty member within the Department of Military Studies.

While the military plays a significant role in Krohn’s life, he has revisited his International Relations passion a few times in his career. In 2009 he graduated with a master’s degree from Salve Regina University.

Outside of his academic and work life, Krohn enjoys spending time outdoors hiking, skiing, and camping. While in Erie, Krohn also hopes to take up hunting.

“I love Mercyhurst for many reasons. It’s been interesting to find my teaching philosophy in unique courses that are interesting to the field. The thing I love most about the university, however, is the mission. It is so important, and I am thrilled to be here,” Krohn said.

Krohn can be found in his office in the Center for Academic Engagement. Welcome to the Hurst, Professor Krohn!