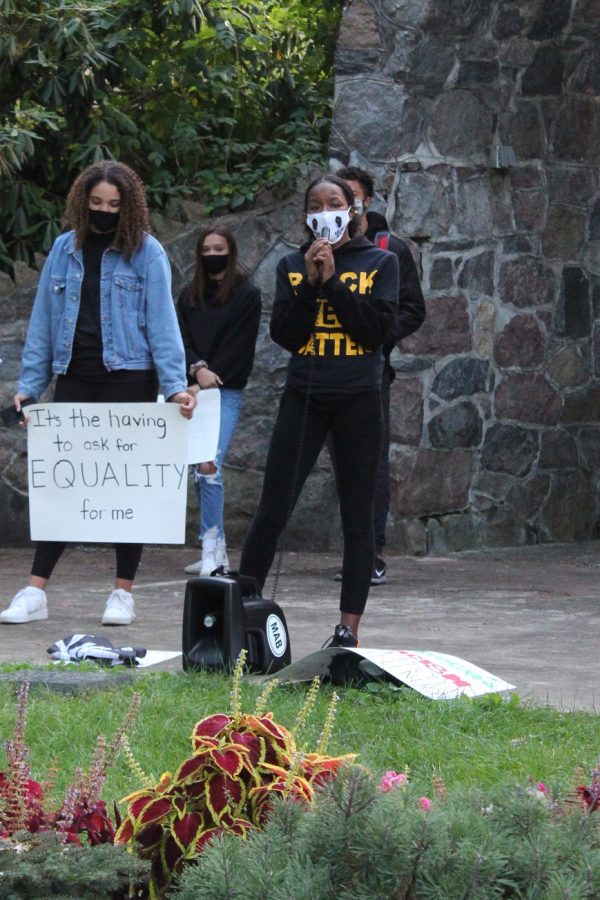 BSU president Janiece Withers kicks off the march with a few words.

On Sept. 21, the Black Students for Unity (BSU) held Mercyhurst’s first Black Lives Matter march. It brought all groups of students together, from all races, sports teams, and backgrounds.

The march started in the Grotto and then moved to the fountain in Munson Plaza, followed by the quad in front of Audrey Hirt Academic Center, down to the Center for Academic Engagement and finally ended in front of Old Main. Each stop consisted of speakers sharing their stories and experiences of injustice.

A lot of planning went into the event as it was the first of its kind in Mercyhurst history. Mercyhurst’s BSU came together with Campus Ministry and Moralyzer to organize the march. Prior to the event, students expressed interest to BSU President, Janiece Withers.

“Students came to me asking about a protest. Me and Moralyzer came together and decided we needed to do something on campus. Campus Ministry wanted to do a vigil and we decided to come together,” said Withers. “We wanted to show that Mercyhurst cares that black lives matter. We want every black student to feel safer on campus.”

“Moralyzer is a first of its kind social advocacy platform that combines social media and tech to replace outdated petitions, donations, and events. We are excited to be working with the BSU and seeing where real change can happen,” Sklyarov said.

BSU members Lily Smith and Alana Lewis also commented on the planning efforts of both the board and members.

“This event was mostly planned by the board. I just joined this year, and I am just excited because Mercyhurst is a predominately white campus and it is important to bring black issues to the surface and bring awareness to the challenges black people face every day,” said Smith. “We have meetings every Tuesday at 4:00 PM, as of now we have no more marches planned.”

Lewis also commented on the planning of the event.

“Planning was a lot of Janiece,” said Lewis. “She talked to people and started organizing it. We are trying to gather people and make signs and spread the word, which was the most important part of it as well as following COVID-19 guidelines.”

With the combined efforts, the event had a very successful turnout of hundreds of people. The march opened with Withers speaking about recent injustices against people of color in the country and the purpose of the event.

She spoke about her own experiences, family, and those that have died at the hands of police brutality. Withers put the Black Lives Matter movement into perspective so that anyone of color could relate to it. She shared her own story of having a brother who could be any one of the police brutality cases we have seen in the news.

The first stop of the march was to the fountain in front of Baldwin Hall. The crowd gathered around to hear Qadry Ismail share a poem he wrote called “African First.”

The poem highlighted important black characters of history, emphasizing that they were African before American. Jacob Holl, a teammate of Ismail, shared a quote from the Dr. Seuss’s “The Lorax:” “Unless someone like you cares a whole awful lot. Nothing is going to get better, it’s not.”

This brought attention to the fact that Black Lives Matter is something everyone should care and fight for, regardless of skin color.

The march progressed on to the quad in front of Audrey Hirt Academic Center. Members of BSU shared stories of those who have lost their lives to police brutality in the last few months. Names and stories were read and followed with the mantra “say their name.”

Some names and stories shared were Breonna Taylor, Daniel Prude, Jacob Blake, and George Floyd. In honor of George Floyd’s name, attendees knelt for 8 minutes in a moment of silence to pay tribute to Floyd who died May 25 when Minneapolis Police Officer, Derek Chauvin, knelt on his neck for 8 minutes.

From there, the march moved toward the front of the Center for Academic Engagement. At this stop in the march, Mercyhurst students came forward and shared their own stories and experiences with racism. The event concluded with a vigil in front of Old Main.

Each attendee was given a candle to hold. Members of BSU read the names of people of color who died from police brutality. A slideshow of victims was played throughout the whole vigil, sharing story lines depicting why police shot each victim.

“This event is to recognize the lives lost and to educate people on what is happening in the world currently,” Lewis said. “In this environment it is hard to find people truly on your side and supporting this event shows true colors.”

This march brought students, faculty and community members together to peacefully march against the injustices that people have color have always faced. Additionally, this showed students that Mercyhurst is a safe place and black lives matter on our campus.