Academy of Arts rumored to be selling famous Michelangelo work 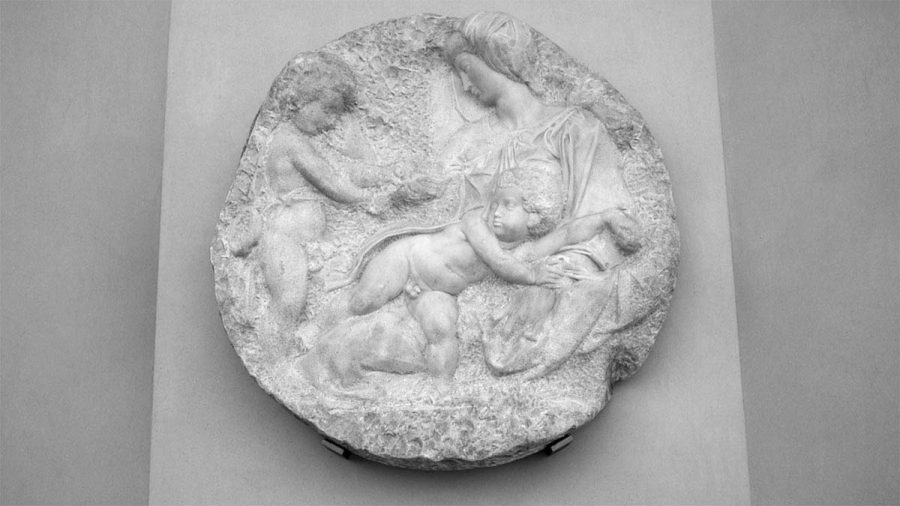 Icy to the touch, yet glassily smooth. When walking past, it haunts the viewer, casting a frigid ghost. Some describe it as ‘the watercolor of stone.’

Marble was the material used to sculpt the image of Mother Mary, baby Jesus and John the Baptist in the famous tondo, “Taddei Tondo.”

The Royal Academy of Arts in London is where this piece calls home, but maybe not for long.

The “Taddei Tondo” was chiseled by the famous Michelangelo in the Florentine Renaissance Period. “Taddei Tondo” is its nickname, it is properly titled “The Virgin and Child with the Infant St John.”

This piece was made for the Florentine wool merchant Taddeo Taddei around 1504-05, which is where “Taddei” comes from. The word “Tondo” means round, since it is a circular relief. The tondo illustrates Mother Mary sitting with a baby Jesus sprawled across her lap. While looking over his right shoulder, Jesus spots an infant John the Baptist, who seems to be holding a bird. The bird is most likely a golden finch, which represents passion in Catholicism.

Michelangelo uses the natural flow of the eye to make the viewer notice Mary sitting, then look down to Jesus in her lap. The eye moves across to John the Baptist, and back to see Mary looking at John, who is gazing at the baby Jesus. This uses the old composition of a “Z” formation that can be innate to the viewer but intentional by the artist. Michelangelo often used this technique in his work.

The Royal Academy of Arts in London is where the “Taddei Tondo” is currently located.

This establishment relies on ticket sales and museum memberships as their main sources of income, of which they have lost 75 percent this year.

There were rumors that the Academy would be selling the 515-year-old sculpture to make up for the income loss and to protect jobs. The estimated price would have been 700 million pounds. This translates to $905,345,000 in US dollars.

However, upon hearing these rumors, the Royal Academy president, Rebecca Salter, was “horrified” that the offer had been put on the table.

In response to the rumors, the Royal Academy has issued a statement, “The Royal Academy of Arts has no intention of selling any works in its collection. We have the privilege and responsibility of being custodians of extraordinary works of art. It is our duty to look after our permanent collection, for current and future generations to enjoy.”

However, this is not the first time the sale of this piece has been brought up.

In 1978, the museum owed 675,000 pounds to the Drummonds Bank, but financial reconstruction took place, and the offer was overturned.

Today, the “Taddei Tondo” is safe behind glass at the Royal Academy of Arts. It is placed thus to protect it from air pollution and possible vandalism. Many have the opinion that art of this scale should never be sold. It belongs to the world and it should be viewed by all. Regardless of whether or not this work will ever be sold, none can deny that is a beautiful piece that deserves to be revered.