Lakers golf back on the course 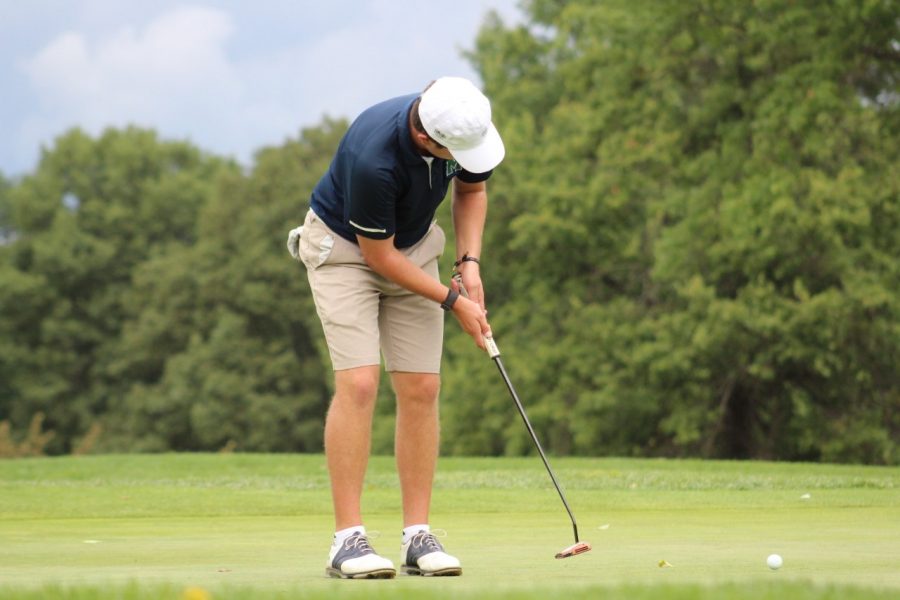 On Sept. 29, both the Men’s and Women’s golf teams compet-ed for the first time in 2020 at the Cavalier Fall Invitational. Hosted by Walsh University, the teams played 36 holes at the Quarry Golf Club in Canton, Ohio with a mix of both familiar faces and new players.

The men’s team made a top three finish at the Cavalier Invita-tional, with a major contribution from Angelucci. He opened with 76 and sat in a tie for fifth place.

Following that, he scored a three-under 69 with one of four eagles on the course in two rounds. Angelucci took advantage of the course’s par fours with an ending average of 4.05 strokes. This earned him Medalist of Hon-ors as well as the title PPG Paints Mercyhurst Athlete of the Week honors.

“It is a great honor to be named the Mercyhurst Student-Athlete of the week, I am lucky that I have teammates who push me every day,” said Angelucci. “So as much as it is an individual award they definitely deserve credit because I wouldn’t have been able to accom-plish it without them.”

Peters played well finishing in third with the best average score on the par fives at 4.38 with a final score of 149. Ferry was also able to place in the top ten with a fi-nal score of 155, tying for eighth place. Smith ended in 21st with 167. Piecuch and Golembiewski both finished the day at 176.

“It feels great to be back play-ing the sport I love. COVID gave me time to work on my game, al-though my game hasn’t been the best lately,” Walter said.

The women’s team also ended the Cavalier Invitational with a third-place finish with an overall score of 693. Walter led the Lak-ers with a two-round score of 163 earning her a fourth-place finish, as well as the PPG Paints Mercy-hurst Athlete of the Week title.

A freshman majoring in Graph-ic Design, Walter led the score-board on the course’s par fours with a 4.35 average and tied the lead in birdies, scoring four.

“It felt awesome to be named Mercyhurst Athlete of the Week because I am an incoming fresh-man and I would like to think that it is pretty impressive. I worked my tail off to get into this school and to play collegiate golf. Stuff like this makes me realize that it all pays off in the end,” Walter said.

Orr finished the invitational in 11th place at 171 and Vietmeier ended in 12th place with 175. Both Orr and Vietmeier ranked near the top of the field in pars, ty-ing for fourth with 17 each. Kuty scored 184 landing her in 18th place and Henry in 21st with a final score of 188.

“I just know that we’re going to be a strong team in the spring,” Walter said.

Both teams moved on to Tiffin, Ohio for their second invitational a few weeks later. Hosted by Tif-fin University, the Kyle Ryman Memorial Fall Invitational was played at the Mohawk Golf Club. The Mercyhurst men’s golf team played on Oct. 7 and 8 while the Lady Lakers competed on Oct. 10 and 11.

The men played three rounds total with a pair on Oct. 7 and a fi-nal round on Oct. 8. Ferry led the men’s team tying for 22nd place at 224 with matching scores of 73 in the first and second round, and closing at 78 for the final round.

Angelucci ended two strokes behind Ferry at 226 earning him 27th and Peters tied for 42nd at 321. Piecuch and Smith ended at 249 and 250 closing out the scores for the Lakers.

Both teams currently do not have their next competition scheduled but one can check http://hurstathletics.com for updates.