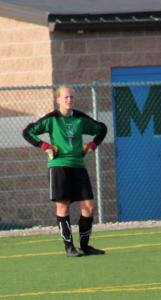 Graduate student Rachel Griepsma has shown these three qualities during her years at Mercyhurst. A native of Lindsay, Ontario, Griepsma has been a dual athlete for the past five years, participating in both soccer and water polo.

On the soccer field, Rachel serves as the last line of defense, goalkeeper. After seeing limited action as an underclassman due to playing behind former All-American Rebecca Heintzman, Coach Keith Cammidge said that didn’t slow Rachel down.

“It says a lot about her character that she handled this situation about as well as she could. She remained self motivated, did not complain and continued to work hard,” Cammidge said.

Patience has shaped Griepsma into being a standout leader for the team. Being patient led to her starting spot in goal.

“She has been the starting goalkeeper for the last three years, and her maturity, leadership and hard work makes her a good fit for our program and the graduate school. That is why she is one of the team captains,” Cammidge said.

On the season, Griepsma has four shutouts, 31 saves and a .721 save percentage.

Her success has been continuing to grow and develop, backed by her hard work, coaches and teammates in each respective sport. She says she feels that she has grown equally in both, not one over the other.

She explained being a dual-athlete as, “busy, but I wouldn’t change it for anything.”

Griepsma feels the biggest adrenaline rush being in goal. Being the last line of defense, “you feel a sense of accomplishment, that you have helped to lift the team,” she said.

After playing limited minutes freshman year, Griepsma finally earned her start in goal. The patience paid off when the team beat Edinboro 4-1. “That would definitely be my most memorable game,” she said.

“As an All-American Water Polo Player, Rachel has accomplished a lot in the classroom and the Mercyhurst Sports arena,” Cammidge said. “She will be missed.”

Once she completes grad school, Griepsma is looking to to be a strength and conditioning coach and work with athletes who have a strong love and passion for their sport, influenced by the same passion she feels for both of hers.

After five years of experience, Griepsma believes that every freshman should know that “time management is key.”

Griepsma and the women’s soccer team will be back on the field Thursday, Oct. 6, at Ohio Dominican.