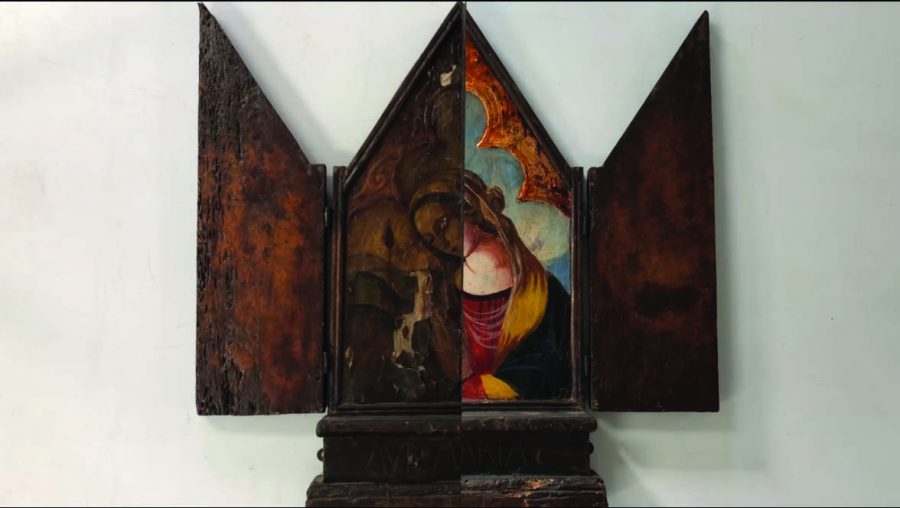 Many of us have grown accustomed to viewing ancient paintings in museums, and we read about their rich history while luxuriating in their stark colors and impressive detail.

What we do not see are the hours of work that go into the restoration of these paintings prior to their display.

Over time, old works of art build up layers of dirt and grime over top of the paint, muting the colors. Fabric canvases or old bits of paper deteriorate, and the paint itself often chips off. What was once a great masterpiece can become a shell of its original grandeur, simply due to a lack of technology at the time of conception and poor storage conditions in the ages since.

Julian Baumgartner runs his second generation restoration business in Chicago, and has been posting videos about his projects since 2016. He now has over one million subscribers.

Baumgartner has restored works such as “The Roman Campagna”, “Ave Maria”, and “Iron Workers”.

Some of his videos are under ten minutes, others range to a half an hour, while still more spill into a series of multiple videos to capture the complexity of the process.

Many of his videos are uploaded in two versions: one is narrated, during which he explains the what and why of his decisions, from whether or not to wear gloves at a particular point to what type of solvent to use for a certain grime build-up. The alternate version is in ASMR, wherein none of the voice is included but the sounds of scraping, hammering, and painting are amplified.

He also posts live streams of cleaning, touching up, and repairing different paintings in real time. While he does so, Baumgartner answers questions posed by his live viewers in the chat function.

He also explains the proper techniques and tricks of the trade in greater detail than in his shorter videos, although he makes it clear that his videos are not meant to be instructional, only informative.

The expertise is obvious as Baumgartner deftly handles canvases that are close to disintegration, and then mixes paint colors that exactly match the originals.

“As a conservator, it is my job to restore the painting to how the artist envisioned it, not to make editorial decisions” said Baumgartner as he restored “Mother Mary”. “Some days I have to wipe it [the paint] all off and start over because the light wasn’t right or because I’m not satisfied with the retouching,” he continues to elaborate.

The amount of work that goes into restoring a single painting is evident simply in the sheer number of tools and technology required for the job, including vacuum sealing tables, heat activated glue, magnetic hammers, the human touch, concoctions of solvents specifically mixed to target certain debris and so forth. It is an incredibly detailed process.

After all of that, a restored painting is good for around 150 more years before it will need to be revisited. At that point, whatever futuristic paint restorer that faces these works in the future will have the ability to completely erase any work that Baumgartner has done and start from the very beginning, as all of the pigments and glues he employs are reversible.

Imagine, putting all of that work and heart into a project, yet trusting someone else with the power of negating it.

Overall, this channel is both informative and highly educational while remaining relaxing and engaging.

If Julian Baumgartner can dedicate over forty hours to restoring one painting singlehandedly, we can surely finish the semester with no breaks!