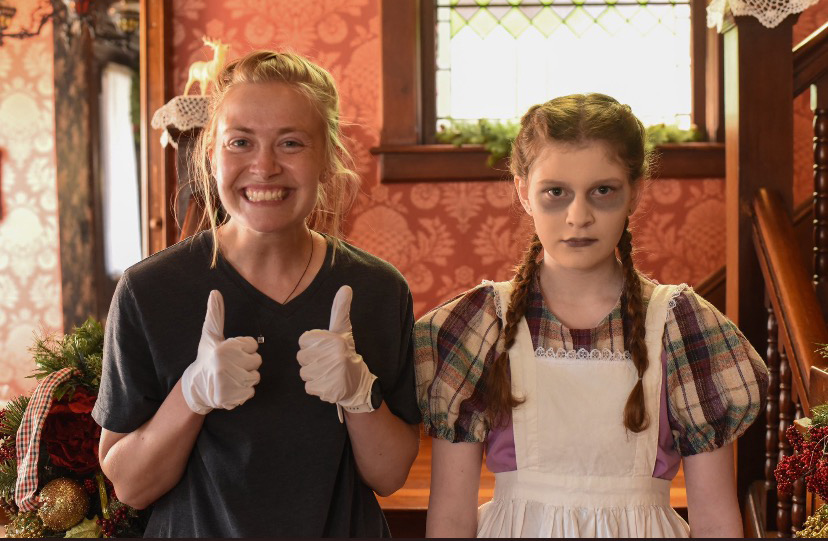 On Oct. 28 at 7 p.m., the History Department and History Club co-hosted the world premiere of “Claire de Lune,” a film written and directed by Mercy-hurst Class of 2018 alumna, Syd-ney Van Leeuwen.

Van Leeuwen is a recent graduate of the Motion Picture Institute of Michigan, Michigan’s oldest film school. For her degree, she was tasked with creating three films: a silent film, one with dialogue, and one with a thesis, which is where “Claire de Lune” comes in.

The film focuses on the treatment of insane asylum patients during the Victorian Gothic era. The main character, Claire, is suffering from postpartum depression after her child was stillborn. At the same time, she is being haunted by the voice of the child and an abusive husband, Hal, that placed her in the hospital for the mentally ill. Frustrated by the voices that no one else hears and desperate for someone to understand what she is going through, she commits suicide. The hauntings do not stop there, which makes for an interesting, chilling story.

Van Leeuwen first had the idea for this project in December 2019. “I saw a picture online about the reasons women were institutionalized back in the 1890s and was inspired to write a story about mental health,” Van Leeuwen said. She knew wanted to write a story about women in history because this is something we, as an audience, do not always get the opportunity to see.

During her writing process, she consulted with History professor, Averill Earls, Ph.D. to ensure the piece was historically accurate. “I consulted Dr. Earls from the History Department at Mercyhurst to ensure the accuracy of my script. Having been a History major, I wanted to do justice to the time period as much as I could,” Van Leeuwen said.

In July, she traveled to her hometown of Medina, Ohio with a crew of a dozen classmates, friends, and family members. She then was responsible for the color grading and editing, which concluded just in time for her to screen the film at her graduation in mid-October. In all, the film took about a year to complete. The Mercyhurst premier was a perfect pairing of Van Leeuwen’s undergraduate experience with her new project. Students, faculty, and staff were invited to watch the film in person or through Zoom. “I loved Mercyhurst, loved my major, loved my professors, and love that I can always touch base with my Hurst family. Hurst is Home and I truly mean that,” Van Leeuwen said.

Professors were equally excited about the opportunity to show her film. “We wanted to host the event because Sydney Van Leeuwen is an alumnus of the department and was our very first Documentary Film graduate. She created her own contract minor and inspired the creation of our Documentary Film concentration,” Earls said. “Since her film, which is rooted in historical research, went so nicely with Halloween- time in its release, we thought it would be a perfect opportunity to showcase her work and the success of one of our grads.”

The film was shown by History Club, with viewers encouraged to dress up to match the film’s theme. Looking to the future, Van Leeuwen has no immediate plans for the creation of another film. Although she loved the planning, scheduling, and organizing of the project she would prefer to be in an assistant director role. She said she would only want to direct again if she was especially passionate about the subject matter.

“Eventually I would like to direct a movie about Commodore Perry, but that’s away down the road,” Van Leeuwen said.