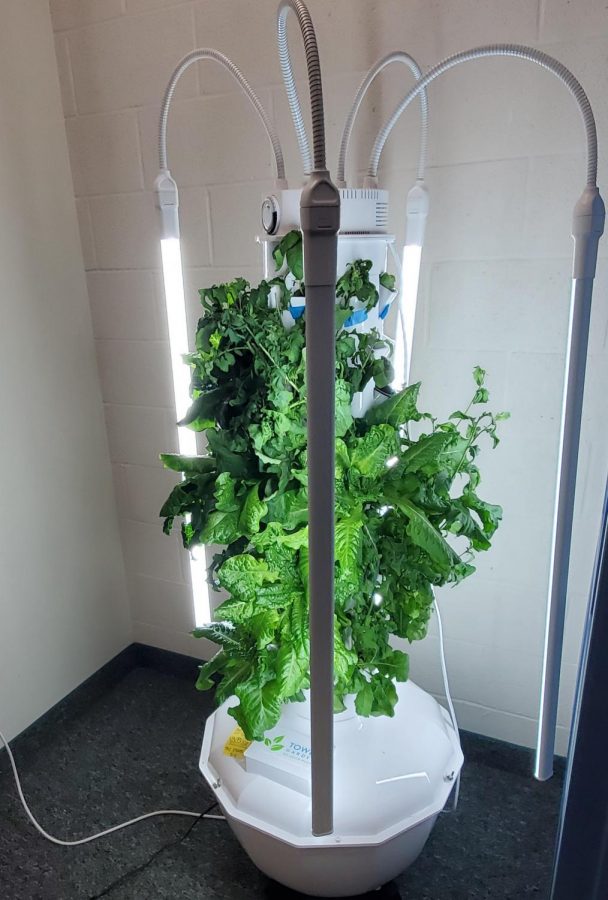 Though the weather outside is gray and dreary, it is easy to find some cheerful greenery around campus thanks to the new Tower Gardens project spearheaded by Mercyhurst graduate and Ameri-Corps VISTA volunteer Shannon Meyers.

Meyers is leading the Tower Gardens project with the support of Community Engagement and the Public Health department as part of Mercyhurst’s Cam-pus-Supported Agriculture initiative, which aims to decrease food insecurity and improve healthy food access in the Erie community.

“Tower Gardens are vertical aeroponic garden structures and three of them were purchased through the Mercyhurst sustain-ability fund. The goal is to use them on campus for students and staff to improve access to fresh and healthy produce. The long-term goal for the project is to use this program as a pilot to test tow-er gardens before implementing them in the program to fight a larger problem of food insecurity and food deserts,” Meyers said.

Erie County has 12 food deserts or areas with insufficient access to healthy foods like fresh produce. Of those 12, 10 are located in the city of Erie itself, which is where Mercyhurst’s Tower Gar-dens come into play.“Once the farmers’ markets stop in the summertime, your only access to fresh produce is what you get at the grocery store,” Meyers said.

“There’s an interesting opportunity to start growing year-round here and to get people healthier food but to also keep it within our ecosystem of Erie.”The need is especially great due to the pandemic.“The food insecurity problem has been exacerbated by COVID-19,” Meyers said.

“There are so many more people who are going to food banks and who have lost their jobs and now need help that they didn’t need before.”Erie has many community-sup-ported agriculture programs, or CSAs, working towards the common goals of eliminating food deserts and increasing food access. Often, local farmers work with community partners within these programs. This maintains a local food ecosystem and fosters collaboration.“You get out what you put in,” Meyers said of CSA programs. “It’s a mutual relationship of helping each other.”Mercyhurst has a total of three Tower Gardens, one of which is located on the third floor of Hirt.

The eventual goal is to keep two Tower Gardens on the Mercyhurst campus and loan the third out to schools and organizations in the community. Each Tower Garden is a self-contained system, with growth lights and a watering mechanism. Leafy greens grow especially well in the Tower Garden, but over 150 different types of fruit and vegetable plants can grow in the ecosystem.

In the Mercyhurst Tower Gar-dens, Meyers is currently growing a variety of crops: lettuce, kale, arugula, basil, cucumbers, peppers and green onions. The process can be a bit intimidating, she admitted, especially when it comes to timing the different harvests. But that has not kept her from looking to expand the project even further.

“I’m excited to start moving outside in the summer,” Meyers said, explaining that this will allow for more plant variety due to the access to natural pollinators. The project is expanding be-yond Mercyhurst’s campus, too. Meyers is working with the local YMCA Teen Center to begin a Tower Gardens initiative there as well. The YMCA is looking to devote two full rooms to Tower Gardens.“There’s a lot of possibilities of programming that can be done around that, like with cooking and gardening and the business side,” Meyers said.

The Erie Boys and Girls Club also has a Tower Garden and is looking to take advantage of the green space on its grounds to expand programming by encouraging kids to try healthier food. The prospect of inspiring youth to be interested in nutrition and gardening is one of the most fulfilling parts of the project for Meyers.

“I feel like we all have these little experiences of, ‘I planted this,’ or ‘I remember getting a sprig of this when I was little’ and I have this vision of, let’s put that universal experience that we all had and put it on steroids and have an indoor garden, and really go with it,” Meyers said.

Meyers also hopes to collaborate more with Mercyhurst students from a range of academic fields. Already, students from the Chemistry, Public Health, and Education departments have in-corporated the Tower Gardens initiative into their academics.

“I want students from any major if they can integrate it into their classwork, to make it happen,” Meyers said. Meyers will be working with the Sustainability Office work-study students on the project in weeks to come. In addition, CSA is open to new participants.

Interested students can email Shannon Meyers for more information. The Tower Gardens are certainly bringing a splash of new life to campus even in these winter months, but even more importantly, they’ll be helping an excellent cause in the community. Overall, the project proves be-yond a doubt that you can’t go wrong with going green.