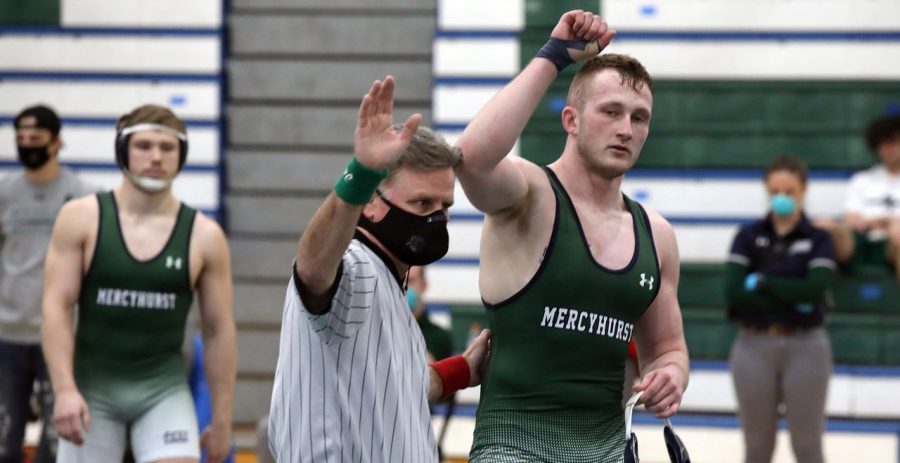 The Mercyhurst wrestling team has closed out their regular sea-son by winning seven bouts in a competitive matchup with Gan-non University. The Lakers scored their seven wins at the Hammer-mill Center on Feb. 10 ahead of their regional competition at the end of this month.

The Lakers had a mixed performance overall. Trevor Johnson came away with a big win at 174 pounds when he upset Gannon’s No. 5 Luigi Yates 5-2.

Mercyhurst also picked up a pair of wins at 133 pounds with No. 4 Eric Bartos picking up a tech fall and Roland Mills scoring a 14-4 major decision over Gannon’s Jacob Gardner.

At 157 and 165 pounds, Gan-non was able to fall Lakers Spen-cer Head, Jason Breeden and Dom Ferranti. Aiden Burke won a pair of matches at 141, pinning Gannon Knight Hayden Butter-field and picking up a 9-0 major decision over Parker Loera.

Matthew Ferraro scored a fall at 149 defeating Joel Huck, while No. 2 Jacob Robb ran his record to 4-0 with a first period pin of Gehrig Hutchison.

Eric Bartos, a redshirt junior majoring in accounting and finance, said the match was a learning experience.

“With regard to the match this weekend against Gannon, I think we had improvement but the match showed that we are one small adjustment away from being an elite team,” said Bartos. “I think we sit on the fence of being a good team and a great team and if we can tweak our mentality, we will be able to com-pete and be a threat to the best teams in the country. We had some really good matches against Gannon which showed where we were strong at.”

The Lakers were due to finish out their regular season with a matchup against Ashland, sched-uled for Feb. 13.

The match was canceled and will not be rescheduled, meaning the team will next return to the mat on Feb. 28 when Men’s wrestling will host the Super Region I tournament at the Mercyhurst Athletic Center.

“We tend to wrestle well at regionals so if we can build on our match then we’d be looking at a lot of Mercyhurst national qualifiers,” Bartos said.

“I’m excited for the guys to have an opportunity to compete in the postseason. They have made a lot of sacrifices in order to be in this position and I’ll be very grateful if we get a complete postseason in,” said Coach Mike Wehler.