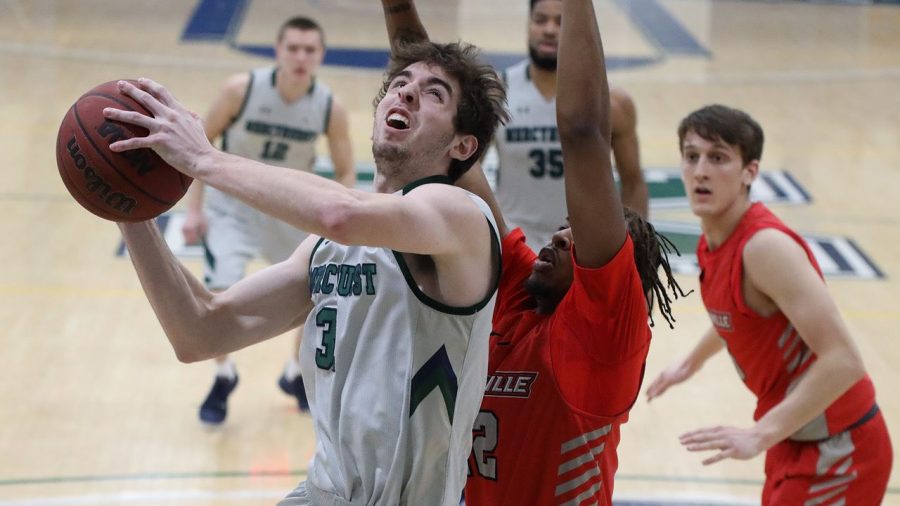 The Mercyhurst Men’s bas-ketball team moved to 9-0 after cruising past the D’Youville Saints twice over the weekend.

Both games were played at the Mercyhurst Athletic Center and the hosts took advantage of being the home team. The first game, held on Feb. 12, resulted in a 90-56 Lakers win. The leading scorer for the Lakers in this match up was junior guard Steve Cannady who had a sea-son-high 19 points on 7-11 FG.

Mercyhurst jumped out to an early 4-0 lead after Cameron Gross and MiyKah McIntosh both had layups. The start of the game was close, however, with the game being 11-10 after a 7-0 D’Youville run.

The game did not start out as well as Mercyhurst would have liked but after a few late runs, the Lakers were able to head into the break with a 37-34 lead.

Mercyhurst took advantage of the break and sprinted out on a 21-5 scoring run to open the second half. The Lakers took over from that point on and never relinquished their lead.

By the time the 8-minute mark came, the Lakers had an impres-sive 74-44 lead off of a 11-point run by Steve Cannady.

Four Lakers played incredi-bly well and posted double-digit scoring efforts. MiyKah McIn-tosh went 6-17 FG and scored 15 points while Michael Bradley shot 5-9 from the field and scored 12 points. Daniel Ogele had a great game as well, nearly posting a double-double, with 11 points and 9 rebounds. The defense was also incremental to the winning effort as they forced 36 turnovers on D’Youville.

The second game was even more impressive for the Lakers as they completed the two-game sweep with a 99-31 victory against D’Youville. After a 6-4 start for the Lakers, they lit it up with a 13-0 run which led to a 19-4 lead with 14:20 left in the half.

The D’Youville Saints pulled within 10 before the Lakers went on a 26-4 run. The Saints did not score within 5 minutes left in the half and the Lakers were up 59-17 at the half.

The Lakers completely dominated the second half as well with a 50-point lead with 5 minutes gone.

After making it 72-21, Mercy-hurst went on a 15-0 run. Mercy-hurst did not allow D’Youville to score even 15 points in the second half.

The story of this game was the significant contributions from nu-merous players from the Lakers, with scoring opportunities pres-ent throughout the entirety of the game.

13 total players scored for Mer-cyhurst in the second game. Owen Chambers, Sean Lang, and Kofi Osei all scored their first points in a Mercyhurst uniform. Michael Bradley led the team with 12 points and Mercyhurst shot 61% as a team.

The Lakers also shot 41% from three-point range and controlled the glass by out rebounding the Saints 44-31. Mercyhurst’s de-fense prevailed in this one as well by forcing 28 turnovers on D’Youville.