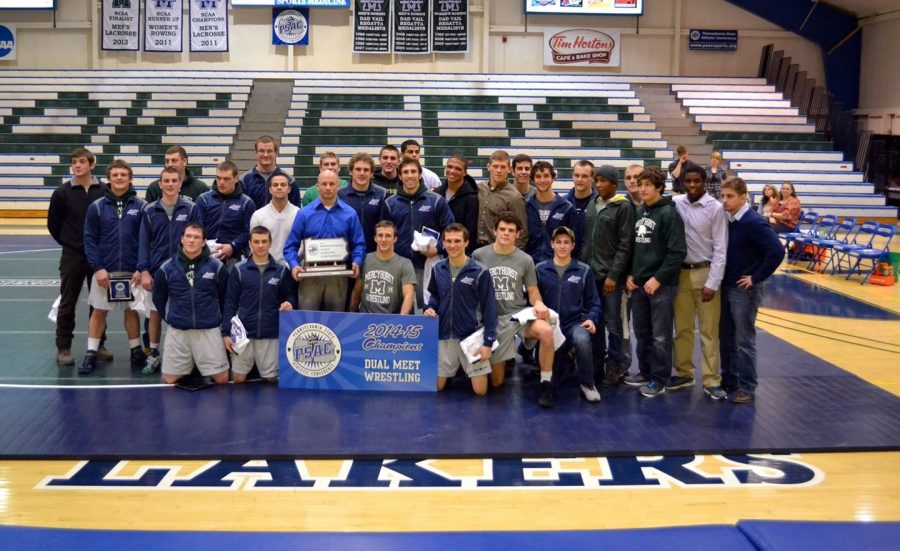 Mercyhurst entered the match up ranked fifth while Pitt-John-stown ranked sixteenth. The hard-fought match ended with a 24-15 Laker win. With the victory Mer-cyhurst improved their record to an impressive 18-1.

Redshirt sophomore Willie Bo-hince opened the event at 125 pounds with a 1-0 victory over Evan Link. Following the night, Bohine held a 28-4 record overall while having gone 18-1 in duals.

Next up was redshirt senior Ryan Bohince at 133 pounds. Ryan fell 2-4 to Corey Bush of UPJ. This was followed by red-shirt junior Kody Young who fell to UPJ’s Sam Hanau 7-4 at 141 pounds.

Nationally-ranked redshirt junior Angelo Bortoluzzi com-peted for Mercyhurst at 165 pounds against UPJ’s own nation-ally-ranked Tyler Reinhart. Bor-toluzzi took a 4-3 lead to start but ended up falling 6-4 after a late takedown by Reinhart.

Next up were three consecutive wins for the Laker wrestlers. These came from redshirt junior August Mizia at 174 pounds, sopho-more Dakota DesLauriers at 184 pounds, and redshirt junior Brian Beattie at 197 pounds. Mizia won by major decision 9-1 over UPJ John Blankenship.

For the last match of the day, Beattie took a 4-0 victory over Forrest Tuttle.

Mercyhurst had five wrestlers ranked in the top eight of their weight class on the national level. These included Bohince, Land-owski, Francis Mizia, Bortoluzzi, and August Mizia.