Lauren Rosewarne, Ph.D., a professor at the University of Melbourne in Australia, came to Mercyhurst College Oct. 11 to give a presentation titled, “Cheating on the Sisterhood,” a feminist examination of the politics of infidelity.
Her book “Cheating on the Sisterhood – Infidelity and Feminism” argues that the phenomenon of “infidelity is an issue worthy of feminist attention.”

“The intention of all my writing is to encourage people to think about issues that they haven’t thought about before or to think about them in new ways,” Rosewarne said.

As an undergraduate, Rosewarne majored in political science and culture studies.

“I didn’t begin calling myself a feminist until I started university and felt that the word had some power to it. Ever since, all my research has been in some way connected to issues of gender and sexuality.”

The Mercyhurst Equality of Women Club, which seeks to engage students in discussions of gender equality, helped to promote the lecture on campus.

Rosewarne’s talk was more than just a discussion of infidelity – it examined how women are sexualized in the media and the workforce. Also the talk dealt with the consequences of various expectations that society puts on women or that we, as a group, put on ourselves. 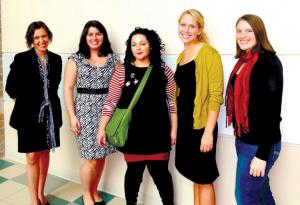 Alicia Cagle photo: Mercyhurst Equality of Women Club adviser, Lena Surzhko-harned, vice president Caitlin Handerhan, Lauren Rosewarne, Ph.D., president Lauren Moss and treasurer Jeanette Long are pictured above left to right after Rosewarne’s lecture last Tuesday.
“It was really interesting. I never thought of this before,” said junior Erico Sanchez. “It was eye-opening.”
Rosewarne said, “I think anyone interested in issues of society and humanity needs to consider a scope of different perspectives, but I think feminism really has to be at the forefront of this. Over 50 percent of the population are women, and while (other issues) are important, statistically women remain the largest ‘minority’ population.”

Rachel Brown, a senior who attended the meeting, considers herself a feminist and found the topic very interesting.
“It really brought together for me some of the conflicts within the feminist movement and how that plays out in individual decisions,” she said.

Before the presentation began, people were carrying in chairs from other classrooms, or standing at the back of the class.

“I was excited that so many people got involved in the conversation and showed up,” Brown said.

When asked about her visit to Mercyhurst, Rosewarne said, “Students and faculty–both men and women–seemed incredibly keen to engage in a dialogue about feminist issues. It was a really warm and inviting environment for me to have visited.”