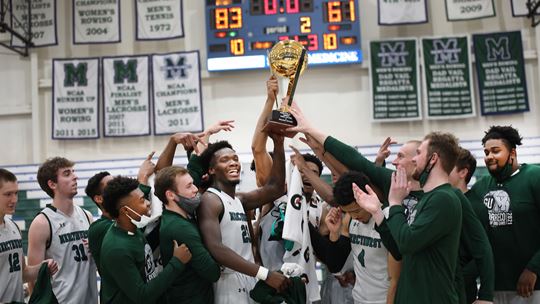 On Feb. 20, Mercyhurst University’s Men’s basketball team once again hosted the annual Porreco Pride of Erie tournament.
Despite the continued state of the pandemic, nothing was going to stop the No. 6 Mercyhurst Lakers from defeating their rivals, the No. 21 Gannon University Knights for the fifth straight Porreco Pride tournament win, 83-61. Played in the Mercyhurst Athletic Center, this game marked the Lakers’ 14th straight win at home.
“First off I want to say that we’re blessed and extremely grateful to be playing during these times. I thought we played good as a team. We shared the ball and got a lot of open looks. One thing I will say about our team is we have 10 different guys who can really score, so different guys step up every game,” said forward graduate student Melkisedek Moreaux.
Starting the game strong, within three minutes Mercyhurst guards Zach McIntire and MiyKah McIntosh gave the Lakers an advantage by putting the score 7-2.
The Gannon Knights fought back hard in the next two minutes brining the score within a point to the Lakers.
Recovering with a vengeance, the Lakers regained control of the game with three three-pointers in a row from McIntosh and McIntire, with Moreaux scoring four baskets in a row making the score 25-11 with less then 12 minutes to go.
Junior guard Steve Cannady helped up the score to 28-13 shortly after.
The Lakers were able to hold the margin by double figures until Gannon’s junior guard Kevin Dodds stole a rebound to put the score back to a single digits deficit at 29-20.
The Lakers held a strong defense against Gannon, only allowing the Knights to outscore them 9-7. By halftime, the Lakers were able to move the keep ahead on the scoreboard at 47-32.
“I thought that I had a good game off the bench but definitely was able to help the team a lot more in the defensive end,” said Moreaux.
In the second period, senior forward Cameron Gross and Gannon’s Dodds opened with four points for their respective teams. Within five minutes, sophomore guard Michael Bradley along with Gross were able to put four in the bucket in a row turning the score 53-34.
Putting themselves even further ahead, in a little over a minute, Moreaux, McIntire and junior guard Nicholas Lang were able to go on a 7-0 run.
In a following three-minute window, Mercyhurst’s senior forward Daniel Ogele along with Lang and Cannady each scored, moving the score 68-43 with less than eight minutes in the half.
Senior forward Joel Ufelle and Moreaux dominated the paint, giving the Lakers their largest lead of the game at 79-50 around the 17-minute mark.
With such a large lead the Lakers gave themselves a big cushion which would later come in handy when Gannon finished the quarter outscoring the Hurst 11-4. Freshman guard Jeff Planutis and Cannady played a strong offensive game near the end, supplying the Laker’s victory.
With a total of 20 points, five rebounds, three assists and three steals along with some great stats, junior guard Miykah McIntosh secured the Game Charger Award for the second Porreco tournament in a row.
Moreaux said, “Overall we like the position we are in and we’re looking forward to practice and prepare for Gannon again on Saturday.”
The Mercyhurst Men’s basketball team is set to play the second game of the Porreco tournament at Gannon on Feb. 27 at 1 p.m. at their Hammermill Center.