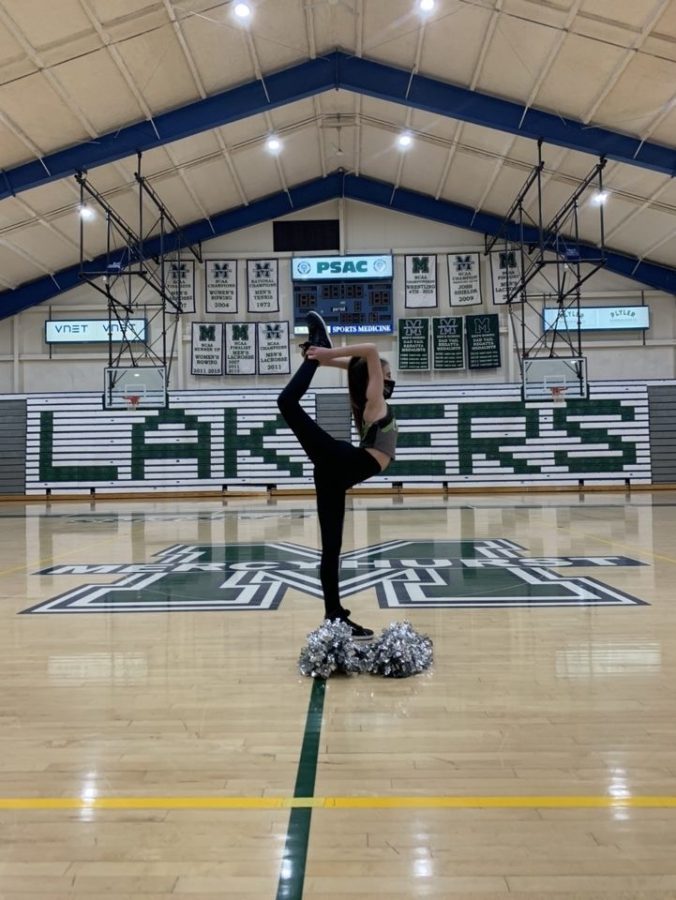 Schrantz joins the Dance Team on the court for one of their recorded half-time performances that will be shown during the semester.

To many, halftime shows are one of the best parts of sporting events. Seeing a show of dancers and singers provides an entertaining break during a heated match.

The Mercyhurst University Dance Team is the staple halftime show for all basketball and football games. However, due to COVID-19, the university is not having sporting events open to spectators. To cope with this loss, the university is providing livestreams of all games.

Now in addition to the broadcasted game, the Dance Team is recording their halftime performance to be shown along with the match.

“We traditionally perform at basketball and football halftime shows but are unable to due to COVID,” said co-captain, Mia Burns. “Once we filmed the first piece, they had the idea of showing our pieces in live-streams of other sports games at Mercyhurst.”

The idea for the virtual shows was spearheaded by the athletics administration and director of Club Sports and Administrative Services, Allison Brace.

Once they got the green light from Brace and coach Danielle Kaiser, the team began recording their prepared dances.

Wanting the Dance Team to still have a season no matter what, the team is bringing fan favorites to the screen such as Eye of the Tiger and Sax. The team is also bringing back old dances from previous years to keep the halftime show fresh.

“So far we have about four dances cleaned and ready to be broadcasted, including Sax, Guaya, September and Eye of the Tiger,” said co-captain, Alexandra Pietragallo. “We are also working on a few more dances so we have a variety to be shown at games.”

In a regular season, the Dance Team would only perform at football and basketball games. However, since the games are being live-streamed, the prerecorded shows will also be a part of more sports. This is exciting because Mercyhurst hockey has never had a halftime show.

“I like the idea of recording and being together as a team,” said Dance Team member Olivia Schrantz. “I am excited to be a part of both hockey and basketball games.”

Nevertheless, there have been some bumps in the road along the way. One challenge the team faced at the top of the practice season was to maintain social distancing.

To accomplish this, the team had to practice in two pods. This is undeniably a challenge for a group, especially in dance. Practicing separately only adds to the number of obstacles COVID has already caused.

“We had to make sure that both groups were on the same page with choreography and counts so that once we could all start to practice as a team, the transition would be easier,” co-captain, Heather Toncich said.

All in all, the Dance Team is very excited to showcase their long-awaited performances via live-stream.

Keep an eye out for more surprises from the Dance Team on their website and Instagram, @mercyhurst_dance_ team.