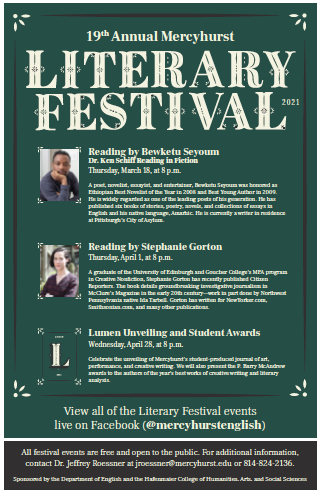 The Literary Festival is always exciting amongst majors in the arts.

This year, there will be two speakers, and then the unveiling of this year’s edition of “The Lumen,” Mercyhurst’s student-written and student-edited literary journal. All events are free and open to the public.

Go to @mercyhurstenglish on Facebook to find the live stream of events.

“Like all of our arts events, the Literary Festival had to be re-imagined for the pandemic. This year we won’t host readers in person, which means that we will lose some options for connecting with our guests. But we’ve gained opportunities as well,” associate dean of Hafenmaier College, Jeffrey Roessner, Ph.D., said.

This year, the Literary Festival will be on Zoom and live streamed over Facebook.

“That will allow us to connect to alumni and prospective students in ways that we hadn’t imagined before. I expect that we will make livestreaming part of all future events,” Roessner said.

Since all of the events are virtual this year, it wasn’t as difficult to prepare.

“Finding speakers was much easier than usual, mainly because we didn’t have to worry at all about travel, bad weather and accommodations,” said Roessner. “They can Zoom in from anywhere, and it doesn’t require nearly as much of a time commitment as getting on a plane to get to Erie.”

The first speaker is Bewketu Seyoum on March 18 at 8 p.m. He is a writer, poet, essayist and entertainer.

Seyoum was named Ethiopian Best Novelist of the Year in 2008 and Best Young Author of 2009. He has also published six books in both English and Amharic, which is his native language.

The second speaker is Stephanie Gorton, who will speak on April 1 at 8 p.m. She has written for many different publications, including New Yorker, Smithsonian and The Toast. She has also been an editor at The Overlook Press, Canongate Books and Open Road. Gorton published a book in 2020 titled “Citizen Reporters,” which tells the story of McClure’s magazine and the rise of investigative journalism.

“Teaching literature, we always seek to make the writing come alive for students. It’s easy to forget that behind the words on the page, there’s a living, breathing person, with a complex history and a clear point of view. Bringing writers to campus helps us make those connections vivid and real,” Roessner said.

On April 28 at 8 p.m., the Lumen will be broadcast over Facebook live stream. Aside from this, the P. Barry McAndrew award will be presented to three students who wrote the best pieces of creative writing and critical essays on literature. The awards are presented to honor Professor McAndrew, who taught in the English department for more than 40 years here at Mercyhurst. McAndrew’s family generously donated cash prizes for the recipients of the awards.

After the presentation of “The Lumen” and awards, there will be an open mic for students to share their works.

If you would like to read your piece during the open mic, email Dr. Roessner at jroessner@mercyhurst.edu.

“Students gain a rich appreciation for the works when they hear them read aloud and are able to ask questions of the writer who is standing right in front of them,” said Roessner. “The Festival also lets us showcase literature as a contemporary art form, still produced and read today