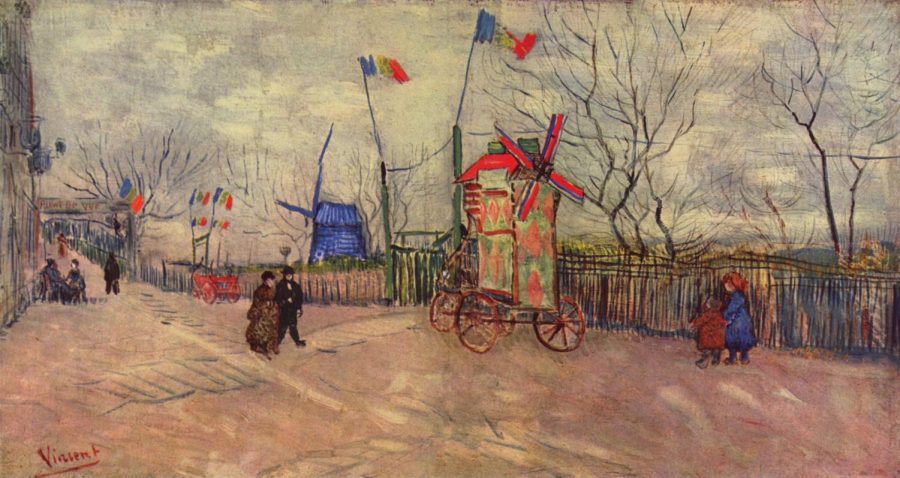 Vincent van Gogh was a Dutch, post-impressionist painter, who is now arguably regarded as one of the most famous painters in history.

Throughout his life, he created about 2,100 paintings, about 860 of which were oil paintings done in the last few years of his life.

In late February, there was a painting by van Gogh that was recently discovered and put on display so that the public can view another one of his masterful works.

This particular painting was from his Montmartre Period.

The painting was titled, “Street Scene in Montmartre.” It illustrates Parisians walking through Montmartre, which is now a historic district and a famous destination in the city. Specifically, the painting represents the Moulin de la Galette, which is a windmill that was turned into a dance hall in the district. The windmill is called Pepper Mill.

Not even thirty years after van Gogh painted his Moulin de la Galette series, the original windmill was torn down in 1911, but two other windmills are still standing. However, the surrounding area has become clouded with more modern ideas such as roads and other buildings.

One could argue that the surroundings now take away from the historical significance of the landmark. Because so much has changed around the windmill, it barely resembles what was so beautifully portrayed long ago. The painting allows whoever is viewing it to get a peek into what life was like in Montmartre at the end of the 19th century. At that point, windmills were the famous attractions that people would go to see.

The painting was created when van Gogh was living with his brother, Theo, in Paris, and it was during this time that he discovered color and how color could change the way a painting was perceived. His paintings prior to his move were often very dark and ominous.

A lot of the paintings from that series are now located in prestigious museum collections and not in the hands of private owners. However, this particular painting had been in a French family’s private collection for more than a century.

The painting has been published in several catalogs, but it has never been displayed.

“Street Scene in Montmartre” was painted in 1887, just three years before van Gogh passed away. While his cause of death was not confirmed, the popular belief of many is that he committed suicide.

The rusty handgun he is believed to have used to end his life was discovered and then recently sold in 2019.

This rediscovered painting will be shown to the public for a short amount of time before being sent away for an auction.

The painting is projected to be sold for between $6 million and $9.7 million. The sale is being handled in a statement by Sotheby’s in Paris on March 25. Before then, it will be on display both in Amsterdam and Hong Kong before returning to Paris to be auctioned off.