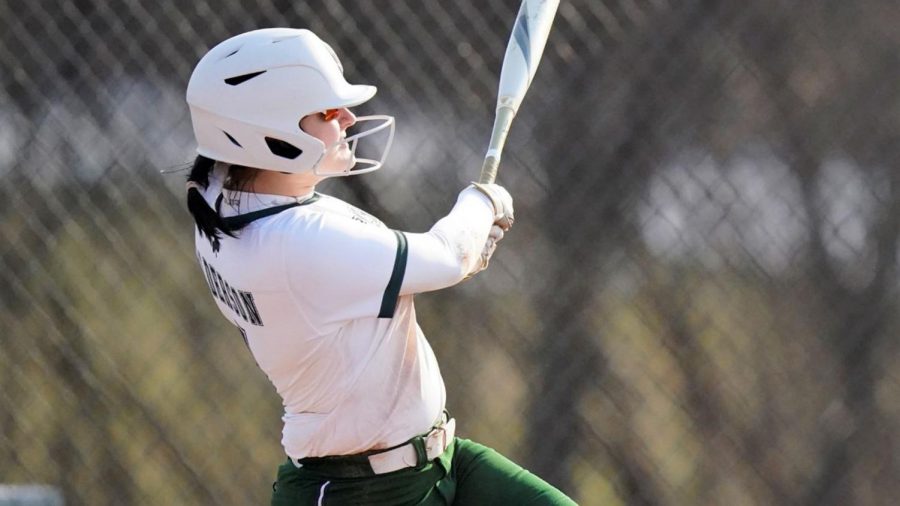 This past week the Mercyhurst Women’s softball team had a four-game match up versus the Clarion University Golden Eagles. The four games were held on both Monday and Wednesday and were split by two games each day one at 2:30 and another at 4:30. Although the four games were not doubleheaders, two games were played each day.
The season opener for both teams, the Mercyhurst Lakers were able to score five home runs between both games on Monday. Dominating the first game, the Lakers won 8-0 and rounded the day off with an 8-3 win during the second game.
After four straight innings of neither teams scoring in the first game, Mercyhurst’s senior outfielder Sarah Koscho scored a point during the bottom of the fourth leading the Lakers 1-0 going into the fifth inning. In the bottom of the fifth, sophomore pitcher and first baseman Marisa Cartellone hit a single to right-center advancing junior pitcher and infielder Cheyenne Hindman to second. Soon after sophomore first baseman and outfielder Allison Dejidas hit the ball to center field sending Cartellone and Hindman home advancing the score 4-0. Freshman infielder Kaci Alderson homered to left field allowing Koscho to score as well, making it 6-0 Lakers. At the end of the inning, sophomore outfielder Madison Fry singled to third base sending junior third baseman Chloe McQuestion home. Sophomore outfielder Brianne Egelston then promptly sent Fry home making the final score 8-0 Mercyhurst.
The Lakers came out strong at the start of the second game. Dejidas singled to center field allowing Egelston and Fry to score two points at the bottom of the first. At the bottom of the second, Alderson and McQuestion both hit home runs quickly building the Lakers’ lead 4-0. Keeping with the theme, both Koscho and Dejidas scored again during the bottom of the third taking the score to 6-0. At the top of the fourth, Clarion finally scored two points but Hindman soon after singled the ball to right-center sending Egelston and Fry home for an 8-2 lead. At the top of the sixth, Clarion scored one more time for an 8-3 total final score.
“We came out ready to play and that was proven on Monday with the 8-0 and 8-3 wins,” said Hindman.
On Wednesday, the Mercyhurst Lakers traveled to Clarion, PA to once again face the Clarion Golden Eagles. The Lakers seemed to have kept up their winning streak from Monday’s games resulting in a very close 3-2 win for the first game.
At the top of the first, Cartellone doubled down the right-field line allowing Dejidas and Egelston to score for a 2-0 lead. Clarion scored one point at the bottom of the third and then once more at the bottom of the fifth. At the top of the sixth, Cartellone hit a home run which would result in the 3-2 game total.
“Wednesday brought a different day and even though we took the “loss” for the fourth game, it was far from [it]. The greatest teams believe in themselves and everyone around them and that’s exactly what we did,” Hindman said.
The Golden Eagles came out strong for the fourth game scoring four times in the bottom of the first. Egelston doubled to center field sending Alderson and Koscho home to bring the score 2-3 Clarion. During the second inning, Clarion scored two more times and Mercyhurst once for a 3-5 total, Clarion. At the bottom of the third, Clarion came out bats a blazing taking the score from 3-5 to 3-8 Clarion. Clarion scored once more in the sixth inning making the score 3-9 Clarion. Unfortunately, the umpires were forced to call the game an inning short due to the oncoming darkness at the end of the sixth allowing Clarion the win 3-9.
Hindman said, “I couldn’t be prouder to be part of such a great team and another family. We’re just getting started!”
“After the 4 games series with Clarion, it was awesome to see how Mercyhurst Softball has grown being a senior on the team,” said outfielder Sarah Koscho. “My approach for the first games of the season was to go out and have fun. That allowed myself and my other teammates to make solid contact on the ball and string runs together.”
“These games were a great confidence booster and gave us a great opportunity to see what we needed to work on to be a successful team throughout the season,” said sophomore Madison Fry. “After all this time, we are just so thankful to be back on the field playing together!”
Since the 4-game matchup, the Lakers have played another 4-game match up versus the Gannon University Knights at home on March 13 and away on March 14.
On March 19 and 20, the Mercyhurst Lakers are set to play four more games against the Indiana University Cardinals.
The details for these upcoming four games can be found on the hurstathletics.com website.