Vendemia takes over as starting quarterback 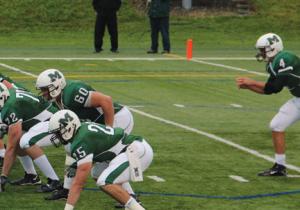 Jill Barrile photo: Sophomore Anthony Vendemia, right, has played well since taking over for injured senior Travis Rearick. Vendemia has thrown for 581 yards and six touchdowns this season.Among the ways a college football player can reach a starting role is to redshirt and learn for a year before gradually earning playing time.

Anthony Vendemia had a different route to the spotlight.

The redshirt sophomore who was supposed to learn from fifth year senior quarterback Travis Rearick for another season before taking over.

Those plans fell apart when Rearick suffered a serious knee injury against Gannon. Vendemia was forced to take over the offense, at Homecoming no less.

Rearick’s injury brought back memories of the 2010 season when Rearick took over the offense. He stepped in for then starter Garrett Kensy who left the Gannon game with an ankle injury.

“The first play, coach made it very easy for me, telling me exactly where the ball was going,” Vendemia said of the Oct 1 game. “It helped calm me down.”

Vendemia finished the game 8-14 for 77 yards and a touchdown, but the Lakers lost the game 30-27. Vendemia was sacked five times in the game.

Throughout his three games, Vendemia has been sacked 15 times. In contrast, Rearick was only sacked three times in five games.

“That’s the hardest part of the growing pains,” Vendemia said. “Most of them I just need to get rid of the ball.”

Despite the sacks, Vendemia is doing his best Travis Rearick impression in his two starts. He has racked up 581 yards passing and six touchdowns on the season. Despite the recent losses, he has given the Lakers a chance to win each week.

Vendemia’s play is thanks in part to the continued guidance from Rearick.

“He has helped out tremendously, not just on the field,” Vendemia said. “The main thing he has helped me with is how to study film.”

Rearick’s presence has helped keep Vendemia loose, and Rearick intends to be there for his teammate the rest of the season.

“He is doing great, and I’m very proud of how he has played,” Rearick said. “I just want to stay as involved as I can and help him out.”

Rearick hopes to take back his old job of signaling in the plays from the sidelines in order to continue to help Vendemia. Rearick said Vendemia has the potential to be better.

“He is more patient than I was and has a big arm. He has made plays already that most quarterbacks can’t make,” Rearick said.

As for the sacks, Rearick said, “It’s experience and something he will learn.”

Vendemia has not had as much success as Rearick did, who reeled off seven straight victories and a Pennsylvania State Athletic Conference (PSAC) West title once he took over.

With the final four games on the road, Vendemia will have his hands full. The next two games are against California (Pa.) and Slippery Rock. They are the top two teams in the PSAC west.