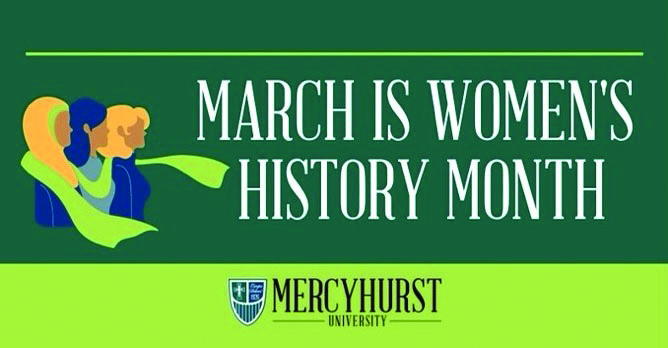 To promote Women’s History Month, the History Department here at Mercyhurst has been sharing one video each day with information about a woman or a women’s organization. These videos were submitted by history majors and minors. The women who they have chosen to feature have impacted their lives, personally or professionally, in some meaningful way.

So far, there have been videos about iconic figures like Joan of Arc, Clara Barton, Bridget Mason, Rosa Parks, Fannie Lou Hamer, and Dr. Ruth Westheimer.

Assistant professor of History, Averill Earls, Ph.D., describes this project. “Lily Smith (the Department Social Media & Recruitment Specialist) and I are running a social media campaign to share stories of women/women’s organizations from history,” said Earls. “We sent out a call to students to submit their favorite stories and we’ve gotten fabulous short videos about all kinds of women that students have learned about in their history classes. I’ve actually been delightfully surprised by the range of people highlighted. We’ve learned so much about Emmeline Pankhurst, Claudette Colvin, Rani Lakshmibai and so many more.”

Emmeline Pankhurst was a women’s rights activist in the UK. She was involved in politics and helped women secure the right to vote. Pankhurst founded the Women’s Social and Political Union, also known as the suffragettes, in 1903.

Claudette Colvin was the first Black woman arrested for refusing to give up her bus seat to a white woman. When she denied the woman the bus seat in 1955 Montgomery, she was 15 years old and pregnant.

Colvin paved the way for Rosa Parks to initiate the Montgomery bus boycott. Rani Lakshmibai was an Indian queen who ruled the state of Jhansi. She was a leading figure in the Indian Rebellion of 1857. Her resistance to the British Raj Kingdom impacted and inspired many. Recognition for this social media campaign has stemmed beyond Mercyhurst and received local news attention from YourErie. com.

Reporter Fontain Glenn spoke with Smith about the project and even encouraged community members to get involved with the campaign by sending any of the Mercyhurst history accounts a direct message with their story of an inspiring woman.

An article on the Mercyhurst website highlights the importance of recognizing women’s accomplishments throughout history, especially those who pioneered the way for the election of the first woman vice president of the United States, Kamala Harris.

According to the article, these women include Victoria Woodhall, Shirley Chisholm, Carol Moseley Braun, Hillary Clinton, Sarah Palin, Geraldine Ferraro and Stacey Abrams, along with many more.

A description of what these courageous women did can be found within the article. To participate in this social media campaign, submit a video of your own about a woman who has inspired you to any of the HurstHistory26 social media accounts.