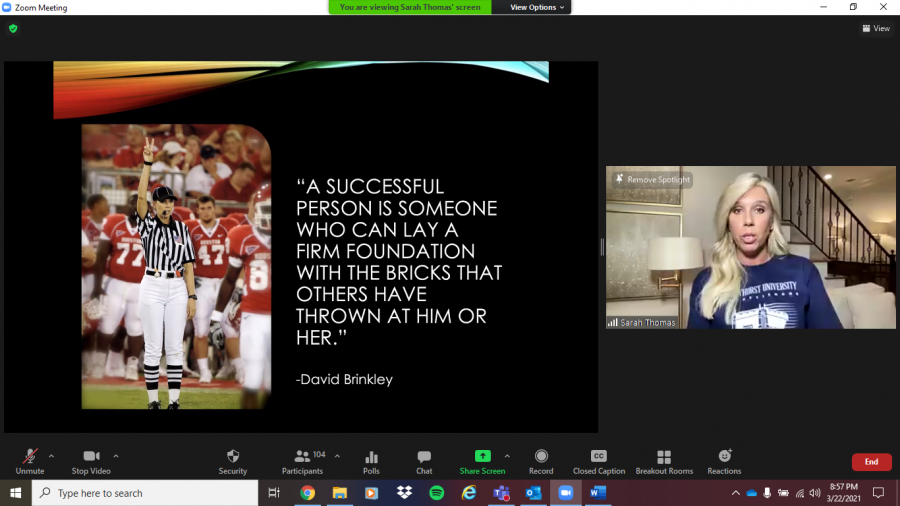 On March 22, Sarah Thomas, the first female referee for the NFL, shared her story with Mercyhurst through the annual MSG Spring Speaker Series. The turn out was great for her presentation and Thomas was very informative.

She made history this February for being the first woman to referee an NFL Super Bowl in Tampa Bay. However, the road to success for Thomas was not easy, as she had to overcome many obstacles and break the gender norms of her position.

Starting off the night, Thomas introduced herself with a little background as to how she grew up. Thomas made mention that everything in our lives plays a part in where we are now and where we will end up in the future.

She grew up in Pascagoula, Mississippi with her family. During her childhood, Thomas and her brothers were very athletic.

“Whatever season it was, we were playing that sport,” Thomas said.

Thomas has a very competitive mindset. She was always taught to never give up and that once you start something you are committed to it.

When she was in the fifth grade, she made it onto a basketball team; however, this basketball team had an all-male roster. Of course, it was a challenge being the only female, but Thomas took this obstacle and used it as an opportunity for something more because she wanted to keep doing what she loved (as well as being good at it).

The next year, while Thomas was in the sixth grade, she had faced another obstacle. Normally during this time for that basketball team you would move up from junior varsity to varsity. However, for Thomas, she was not moved up.

Her parents were told that it was in the rule book that a girl cannot advance to varsity like the other male athletes could. At first this brought Thomas down, but quickly she would see that as an opportunity and capitalize on it.

Fast forward a few years and Thomas was attending the University of Mobile, where she earned a full scholarship to play basketball. During Thomas’s college career she was majoring in communication, and although she did not go down that career path, the major she chose has ultimately helped her so much with the journey that she is on now.

In addition to loving sports her whole life, she wanted to still be involved with them in some way after she graduated college. So she started off small, refereeing as many games as she could at the lowest levels.

Thomas mentioned how she had done this for 10 years and how important it is to start at the bottom and work your way up.

“If you truly work your way up then you can appreciate it,” Thomas said.

After 10 years of refereeing, she thought that she was done. Thomas had three children and she wanted to take the time to be with them. However, during what she thought was going to be her last game, she had made a call that caught the eye of an NFL referee scout. A couple days after that game, Thomas received a phone call and was hired on the spot to become an NFL referee.

Of course, Thomas was excited to be noticed and have been given such an amazing opportunity, so she took it. Thomas mentioned how there was that pressure of being the first female referee in the NFL, because if she had messed up a call how would that affect all of the future women who want to enter this field of work?

However, this obstacle did not hold Thomas back and she has been working hard to be the best that she can be.

Closing the night, Thomas mentioned three important pieces of advice for all of the women, and/or men, out there who were listening tonight.

Thomas included many good pieces of advice that anyone can take and apply to their lives, especially all of the women out there. Thomas is an amazing role model and she proves to girls and women that we are more than what society has to tell us we are.

Thomas broke the gender norms for the love that she had for refereeing and we can all use what she has done with her life and apply it to where we are and where we want to be with our lives.