Baseball sweeps D’Youville this past weekend 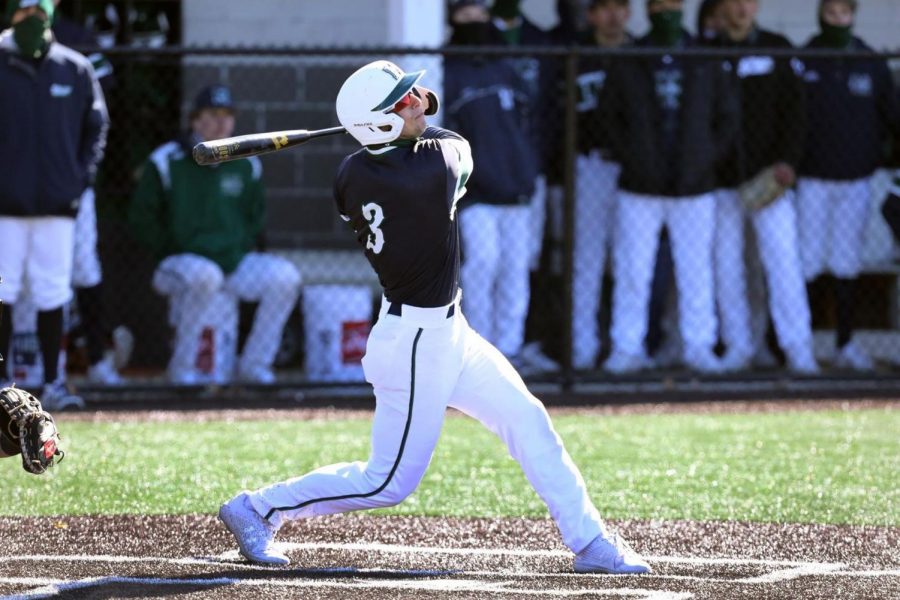 On March 21 the Mercyhurst University men’s baseball team welcomed the D’Youville College Saints to Erie, PA for a Sunday afternoon doubleheader at the Mercyhurst Baseball Field.
Keeping with the weekend’s winning streak from the previous doubleheader versus the Salem University Tigers just the day before, the Lakers swept the Saints with double digits. The first game started at 11 a.m. and ended with a score of 12-2, while the second game started at 2 p.m. with a final score of 19-2.
Coming out strong in the first game, the Mercyhurst Lakers were able to gain a fast lead in the bottom of the second inning for a quick two runs. Freshman utility player Luke Jackson hit an RBI double sending senior infielder Matthew Gibson home.
In the bottom of the third, the Lakers furthered the score differential with senior utility player Philip Ferranti and redshirt senior infielder Luke Baranchak, bringing in two more points for a 4-0 score.
The team was able to add on three more points for a 7-0 score in the fourth inning. The runs were scored by senior infielder Casimer Sobaszek, redshirt junior infielder Troy Banks and senior infielder Josh Surowiec.
In the beginning of the bottom of the fifth, Jackson scored for an 8-0 run. Later on in the fifth with bases loaded, graduate student and outfielder Tyler Zaluski hit the second grand slam of the weekend sending everyone home, with the score turning to 12-0.
At the top of the sixth, D’Youville finally managed to put up two runs, which were the last of the game.
Although D’Youville scored the final two points from the first game, they were unable to build off of that momentum. Mercyhurst came out swinging for the second game, putting four runs on the board in the bottom of the first. Runs were scored by senior infielder Jack Elliot, Banks, Zaluski and Surowiec.
The Saints were able to hit one home in both the second and top of the third, but the Lakers retaliated quickly. Two homers were hit by senior centerfielder Jordan Zilka and Banks respectively for a score of 6-2, Mercyhurst.
The Lakers were able to hold off the Saints in the fourth, all while putting seven more runs into the scorebook for a 13-2 lead.
In the fifth inning Mercyhurst sent six more home for the final runs of the evening, ending the game in a 19-2 total score. The score was advanced by Baranchak, Jackson, freshman center and pitcher John Susnik, redshirt senior Dominick Cecere, freshman outfielder and pitcher Matt Shepard, freshman infielder Matt Christopher and senior outfielder Logan Martella-Tasick.
The Lakers are back in action this upcoming weekend on March 26 and 27 for another four-game matchup. The games will take place at Gannon University’s McConnell Family Stadium and the Mercyhurst Baseball Field in Erie, PA.