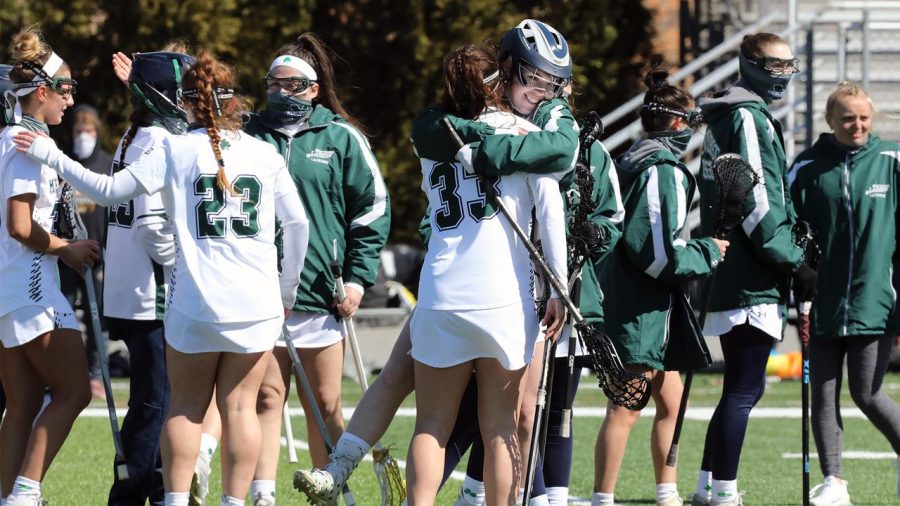 The Women’s lacrosse team remains undefeated after their win against Pennsylvania State Athletic Conference West Division opponent Slippery Rock on Wednesday, March 17. The match took place at Slippery Rock’s Mihalik-Thompson Stadium at 4 p.m. The two teams will meet again at Mercyhurst on April 10.
This was the fourth game of a fourteen-game season for the Lakers, making an undefeated 4-0 record following the game.
Prior to this game, these two teams have played once a season since 2009. Mercyhurst has won all but one of these games, giving them a 12-1 record in the past 13 years. Their only loss was in 2015 at Slippery Rock.
The Lakers had a rough start after they quickly fell behind after Katie Dlugosz of Slippery Rock scored within the first 15 seconds. After this, Mercyhurst stepped up with senior Julia Rescott scoring the first two goals of the game for the Lakers.
Rescott was set up by freshman Gabby McGinn. Senior Molly Meegan scored the third goal and senior Payton Cook scored the fourth, giving the Lakers an early lead and making it 4-1 after 7:13 into the first quarter.
The Rock came back after Emily Benham scored three in a row, tying the game at 4-4. The Lakers saw two goals contributed from Cook and Gina Perna, but each goal was answered by one from Slippery Rock.
The game was tied at 6-6 with two minutes of play left in the first half. The Rock gained their second lead of the game with one more goal, making it 7-6. Meegan scored a goal for the Lakers right before the buzzer sounded ending the first half. Going into halftime, the score was tied at 7-7.
With only 2:17 into the second half Paige Cocina gave Mercyhurst the lead again with one goal, making it 8-7. Julia Rusico received a yellow card which left the Lakers playing down a player for the rest of the game. The Lakers were able to score while down a player, contributed by the McGinn and Rescott duo. Rescott’s goal gave the Lakers a 9-7 lead.
For the Rock, Sam Barnhart was able to score, making the Lakers lead by only one with a score of 9-8. Rescott, Meegan and Cook responded with three straight goals to give the Lakers a comfortable lead at 12-8, less than ten minutes into the second half. The Rock then scored another goal cutting the deficit to 12-9.
Out of the next four goals, the Lakers scored three due to Rescott and Perna. With 15 minutes remaining, the score was 15-10 in favor of Mercyhurst. Slippery Rock scored two more goals and Rescott was able to get her seventh goal of the game, making the final score 16-12.
Rescott led the Lakers in points with seven, followed by McGinn who had six and Cook who had five. Rescott scored seven goals on just eight shots.
Laker goalie Kaitlyn Lippert had 16 saves on 28 shots. The Mercyhurst Women’s lacrosse team is ranked 22nd following the game.
The Lakers are set for their next game this Saturday, March 27, when they host Lock Haven University at 2 p.m.