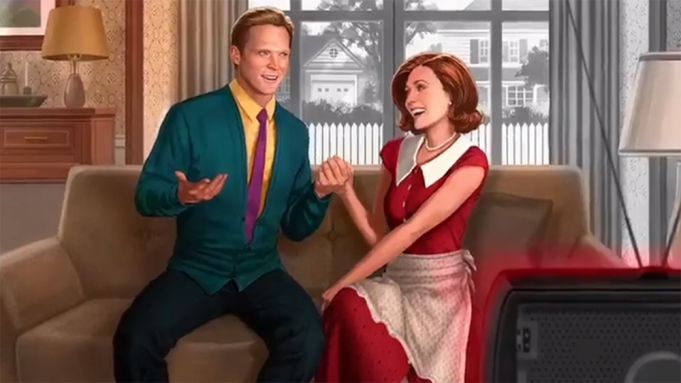 The coronavirus pandemic may have put Marvel’s plans for its cinematic releases on hold for a time, but fans were surely glad to hear that the Marvel Phase Four tele-vision shows would begin gracing their screens this spring. The first of these was the much-anticipated “Wandavision,” ostensibly following the domestic lives of Wanda Maximoff and Vision, who became romantically involved following the events of 2015 “Avengers: Age of Ultron.”

The catch? Within the canon of the Marvel Cinematic Universe, Vision has been dead for five years. Naturally, the question on every Marvel fan’s mind upon learning about the premise of “Wandavision” was, ‘what’s really going on with Wanda?’

That question is at the heart of the show, which breathes new life into the Marvel Universe by flipping the script on Marvel’s traditional action-cinema style, because “Wandavision” opens not as an action flick, but as a 1950s-style sitcom. It’s an interesting move, and one that works flawlessly. Every detail is perfect, from set design, to costumes, to the live studio audience present at film-ing.

The special effects rely more heavily on old-fashioned wires and levers than on modern CGI, at least in the early episodes of the show. And perhaps most importantly, the chemistry between Elizabeth Olsen, who plays Wanda, and Paul Bettany, who plays Vision, brings plenty of playful energy to the show.

Both actors are clearly having a great time, and their sense of fun is contagious. Ever watch “I Love Lucy”, or “The Dick Van Dyke Show”? “Wandavision” channels the goofy yet authentic romance of those shows, providing viewers with nostalgia aplenty. It’s easy to relax and enjoy the banter and antics onscreen — but soon the show takes on hints of “The Twilight Zone” as it becomes clear that something is rotten in the town of Westview, where Wanda and Vision have made their new home. Soon, the classic sitcom recipe begins to incorporate sci-fi and horror undertones, presenting a mystery for viewers to uncover as each episode raises questions and raises the stakes.

And, in typical Marvel fashion, there are plenty of clues to hint towards what’s really going on, for sharp-eyed fans.

The ‘commercial breaks’ with-in the episodes contain some of the clearest Easter eggs, referencing past events within the Marvel Cinematic Universe — and hinting towards developments within the show itself. As the show progresses, more and more familiar faces show up, as well as some new additions to the universe.

But, the show is also able to stand alone as entertaining in its own right, even for viewers with little or no knowledge of past Marvel movies, and its unique sitcom style further establishes “Wandavision” as a fun and approachable installment of the Marvel Universe. It’s also great to gain some character insight into both Wanda and Vision. These characters, although two of the most powerful members of the Avengers, had not taken center stage in any of the previous Marvel films. The massive casts of “Avengers: Infinity War” and “Avengers: Endgame” forced them, and many other characters, into a supporting role.

“Wandavision” puts these two at center stage; a nice change and one that will surely allow fans to connect more deeply with these characters. Hopefully, Marvel’s upcoming Disney+ shows, such as “The Falcon and the Winter Soldier,” which is set to premiere on March 19, will also give new insight into familiar faces.

All episodes of “Wandavision” are available now on Disney+. The show released a total of nine episodes weekly on Fridays beginning on Jan. 15, 2021.