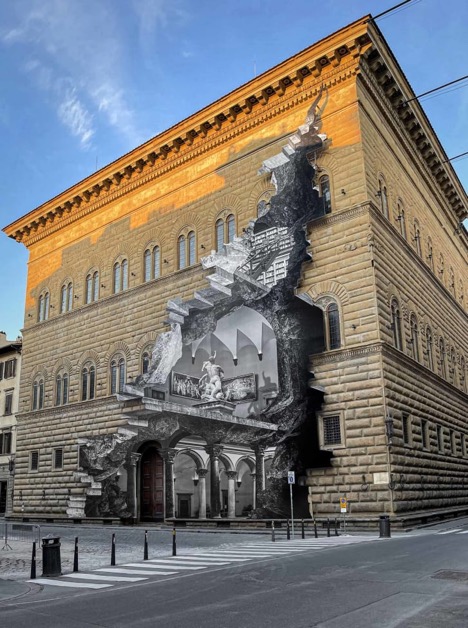 Located on the front wall of the Palazzo Strozzi, a historic cultural arts center in Florence’s center, the work is a staggering 91 foot high optical illusion.

It is titled “La Ferita,” or “The Wound.” Passersby will see a tearing gash along the Renaissance style exterior. The illusion is created by manipulating depth, which makes it seem to the viewer that they are seeing a 3D object, rather than a 2D painting.

Inside the wound, onlookers will see an imagined black and white collage of the interior of the building. The fake interior is complete with marble columns, famous paintings, sculptures and a library at the very top.

The work is supposed to represent the impact the Coronavirus pandemic has had on cultural sites around the world, many of which have been closed for more than a year. Museums, theaters, libraries, galleries and other cultural sites all have been additional casualties of the pandemic.

“Walking through Florence feels strange these days, without the visitors that make up such a normal part of the life of Flor-ence, it feels quiet and less vibrant. Without being able to enter a museum, to attend a concert or spend time at an exhibition, we realize that it is culture that gives life its color and that the beauty of our city is activated by the people that pass through it, to soak up the his-tory and culture of Florence, and leave enriched by it,” JR said in a statement to CNN.

JR, whose real name is un-known, began doing street art in Paris at the age of 13. Since then, his work has been featured in locations all across the world, from Europe to the Americas. CNN reports that the unveiling of “La Ferita” also marks the beginning of the Palazzo Strozzi’s Future Art Programme.

The initiative aims to promote modern and contemporary art in Italy, with a new public art installation revealed every spring in Florence.

Palazzo Strozzi’s Director Dr. Arturo Galansino released a press statement saying that the art center has a “unique” determination to “forge a dialogue between the classic and the contemporary through the involvement of artists capable of interpreting the present.

”Regarding the new artistic gash on his building, Galansino said “it is apt that we launch the Programme with JR’s new work ‘La Ferita.’ (It is) a powerful reflection on the difficult conditions surrounding access to culture in the age of COVID-19, but also a symbol of freedom, creative imagination and participation and an opportunity to involve the audience, the public at large, in a totally new way.”