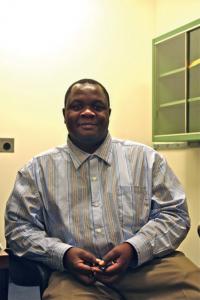 Born and raised in Zimbabwe, Gasseller came to the U.S. in 2002 to receive his Ph.D. in physics at Michigan State University.

Before his career here, he was a visiting assistant professor of physics at Grand Valley State University in Grand Rapids, Michigan.

“This means my American experience has been only in very cold places,” he said.

After living in Michigan for eight years, he said, “I still hate snow.

“I am already apprehensive as the snow season approaches.”

Eager to teach future courses, Gasseller says, “So far I am teaching general physics courses and labs (PHY 201 and PHY 203).

Next term I will teach the conceptual physics courses and labs.

“With time I will be able to teach all the physics courses offered here.”

Gasseller is proud of the work he has produced.

“Perhaps my biggest accomplishment was that when I was a graduate student at MSU, I designed and built a cryogenic scanning tunneling microscope that is being used to do some groundbreaking research,” he said.

He also adds that “so far two people have graduated with their Ph.D.’s using that instrument.”

Gasseller is a very enthusiastic educator.

When asked about what he likes most about teaching, he said, “to see my students succeed.”

Just the idea that I play a minor role in the development of my students is most satisfying.”

He is also more than happy to help students, should physics present a problem in their courses.

“Students should feel free to come to me any time or stop me in the corridors.”

He says that he “will be happy to help them with physics issues.”

Gasseller is hoping to start a small research group in the near future specializing in scanning tunneling microscopy.”

The advice Gasseller provides for students is, “get your education first and everything else will stick to you like dust.”