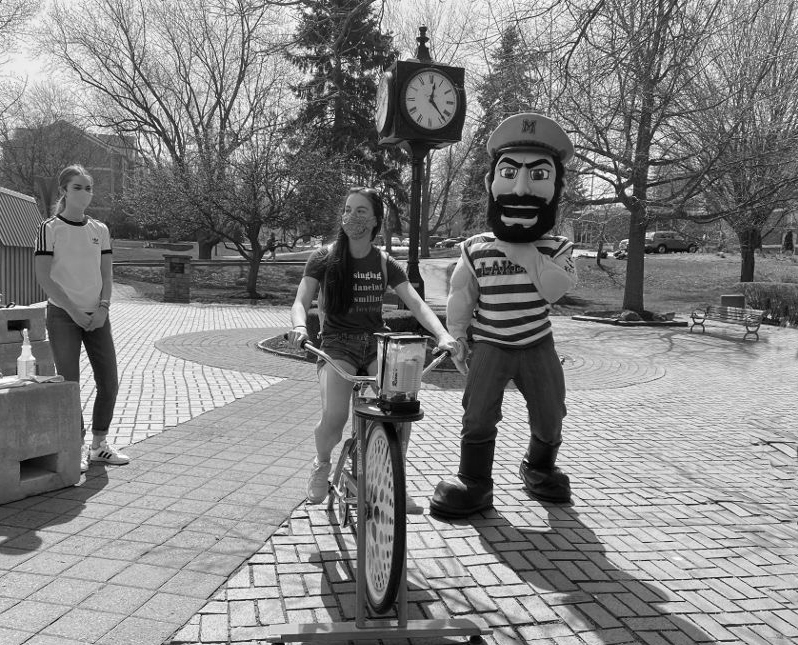 This year, Wellness Week occurred from April 5 through April 9. Throughout the week, there were multiple events held every day to give students the chance to relax and take a break from their homework or responsibilities for a little bit.

Sam Beckas, Activities and Spirit coordinator, was the mastermind behind all the events. “I hope that Wellness Week provides students with a small break from their classes or other responsibilities to explore an area of wellness that may provide them with new wellness tools,” Beckas said.

On Monday, April 5 there were four events that took place. The first one began at 12 noon and was “Mindfulness in a COVID World.” After that students had the opportunity to go to the tents by the Student Union and decorate their own masks.

The last two events could be done throughout the day to ensure students with any schedule could attend them. One was picking up a free coaster in the Student Union and the other was asleep resources session that gave one some tips to help one sleep better at night.

On April 6, there were also four events that students could attend. The first one began in the early afternoon and was art journaling. The next was a volunteer opportunity, where students could recycle t-shirts to put them to good use. The next event held was in the Prince of Peace Chapel and the Campus Involvement Center, where massage chairs were brought in for students to enjoy. The final activity was called Hope for Stroke and it was hosted by a couple of Art Therapy students.

On April 7, students had one of their break days during the semester, so they had plenty of opportunities to enjoy the hosted events. One of the most popular events on Wednesday was the Smoothie Bike located in Trinity Green. Students could ride the smoothie bike to blend their own smoothies or just try some of the pre-made ones. Luke the Laker was there encouraging students to ride the bike and try a smoothie. Next, there was Renaissance Dancing hosted by the Renaissance Club and it allowed students to dress up in costumes and learn some dances from that period. Art journaling was also offered again. In the afternoon, there was a Zumba class offered in the REC.

On April 8, there were glitter jars that students could make to shake whenever they feel stressed. A new event of the day was “Don’t Stop BeLEAFing,” where students wrote a note to themselves on seed paper and then they had the opportunity to plant it and watch it grow.

On Friday April 9, students could attend an event titled “Be Wise… Sanitize.” Later in the day, they could attend an Art Therapy Session hosted by students. Wellness Week had previously only been a one-day Wellness Fair, but COVID prevents that from occurring due to the fact that a fair would draw large crowds. Beckas also talked about how the events were planned this year, knowing that wellness has been harder for many, but has also had to be a priority because of the pandemic.

“Traditionally, we collaborate with campus partners, academic departments and student groups to put on the fair, so I reached out to those folks and more to gauge if they’d like to participate. The willingness fluctuated, but I think we were still able to host sessions that covered all seven dimensions of wellness really nicely.”The events of Wellness Week were documented across Mercy-hurst social media pages. Due to the success of this year’s Wellness Week events, Mercyhurst is hopefully anticipating another Wellness Week in the future.