'Honest Man' will leave audiences reflecting on US legal system 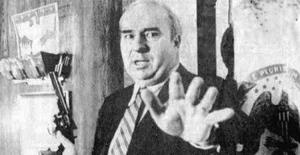 Pac.mercyhurst.edu photoThis week’s installment of the Guelcher Film Series reveals a poignant story that has remained untold for over 24 years.

In an emotionally genuine manner, the film’s director James Dirschberger compiles the sequential events that led an honest and hard-working man to take his own life.

The biographical account begins with the television footage of a gun being whirled around by a visibly agitated man. It is followed by several interviews with Dwyer’s colleagues, friends and family, including his widowed wife and children, which set the stage for the audience to construct their own view of his persona.

The core of “Honest Man” primarily lies on the narrative of Dwyer’s meteoric rise from a professor to a successful political figure and the examination of the corruption case and subsequent trial that he was actively involved in.

Dwyer held the position of the Pennsylvania State Treasurer and had aspirations for higher office.

Dwyer’s reputation, character and ambitions collapsed when he was accused of taking part in a bribery conspiracy.

Throughout the trial, he vehemently proclaimed his innocence and fiercely refused to resign from public office. A jury found him guilty. He faced the possibility of a maximum sentence in prison of 55 years.

On what was to be his last day of freedom before being sentenced on January 22, 1987, Dwyer called a press conference. News reporters and the public expected an announcement regarding his resignation and further information regarding his case.

Instead, they frantically watched as the politician retrieved a large revolver from a manilla envelope, put the muzzle in his mouth and pulled the trigger.

Ultimately, the film leaves the audience reflectively pondering about the efficacy of our legal system and media.