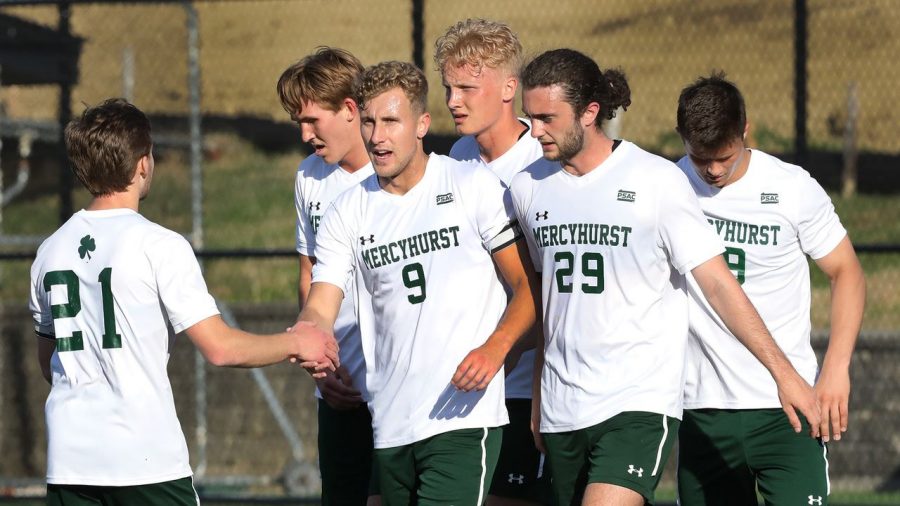 “I’m glad we were able to get another win and continue our winning streak, I think we can play a lot better and we all know that. I’m happy to get the two goals and we’re looking forward to our last game to get another win,” Barry said. A little over 10 minutes into the game, freshman forward, Thomas Binkowski, drew a penalty inside the eighteen box which would allow Barry to take the penalty kick. Unfortunately, the Lion’s keeper blocked the ball, but it would not stop the Lakers.

Mercyhurst gained another opportunity to score but narrowly missed the goal on a well-placed corner kick. The Lions retaliated but their shot hit the side of the goalpost. Returning with a vengeance, the Laker’s own Barry found the back of the net in the 29th minute, taking the 1-0 lead for Mercyhurst with help from teammate junior defense and midfielder, Julio Betar.

Shortly thereafter, Binkowski rocketed the ball into the back of the net after a split pass from graduate student and midfielder Fabio Schortmann. Not only did Binkowski score the second goal of the game for a 2-0 lead, but this was also his second collegiate goal as a Laker.With less than two minutes left in the half, Barry scored his second goal after redirecting a shot from freshman Erik Cederberg. Cederberg was able to get in his shot attempt after reacting to a loose ball from a Mercyhurst corner kick.

Barry’s goal acted as the team’s leading fifth goal of the season. Starting the second half, Penn State Behrend returned from their break aggressively. The Lions had two early chances of scoring with-in this half. During the fiftieth-minute mark, a freekick from the Lions almost found its way past Mercyhurst’s freshman goalkeeper Mattias Odelius but it bounced off the wall of Mercyhurst defenders.

Two minutes later, Penn State Behrend fired a shot but hit the bottom of the crossbar and bounced the other way.In the 58th minute, Binkowski stole a pass from the Lions and took a shot 40 yards out. While Behrend’s keeper was out of position, the ball narrowly missed the goal.The final point for the evening was scored by sophomore mid-fielder Salvador Rang in the 62nd minute. Rang was able to curl his 25-yard free-kick into the top left corner of the net, utterly freezing the Lion’s goalie in place.

The Lakers played a strong defensive game granting Odelius a quieter game in the net. Although not many shots were fired, in the second half Odelius found a way to provide himself some entertainment and got a breakaway from a through ball.

“It was great to come off a well fought win against Daemen and back it up on our home field against PSB with a clean sheet and 4-0 victory. Initially we weren’t playing the brand of football we’d like as it was a scrappy game, however we started to find our rhythm as it progressed. I’m glad to have tallied an assist for the first goal,” Betar said.

“I thought it was the best game that I have played so far and it feels like every game we are able to get better and better. I think the first few games were a bit difficult but now we are able to find our way and we are playing better as a team, as well with each game that goes on. We hope to finish the season strong with a sixth win on Sunday,” Binkowski said.

The Mercyhurst men’s soccer team is set to play the final match of their season on Sunday, April 18 at 2 p.m. at Saxon Stadium in Erie, PA. The Lakers will face the Seton Hill Griffins for the first time this year.