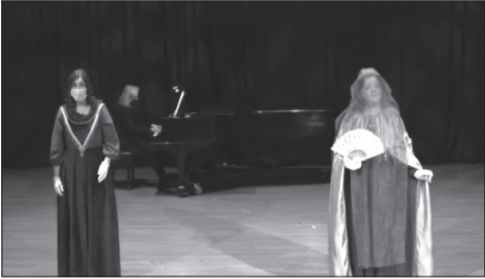 On April 14, The D’Angelo Opera Theatre at Mercyhurst University performed “Magnificent Masks,” a performance consisting of 10 excerpts from songs from some of the most beloved operas and Broadway productions.
The show highlighted seven student performers, while numerous people worked diligently behind the scenes to make this production possible.
The director, Louisa Jonason, Music faculty and costume designer for the show, also coordinated Construction and Concept. The Accompanist was Elizabeth Etter, Ph.D. Andrew Ferguson and Michael Gleason were the technical directors, and Sound & Lighting and Livestream production was done by Paul Caram, Adelynne McCoy, Emily McGarvey and Kirk Morrison.
The first song performed was “Tonight” by Leonard Bernstein from West Side Story. In this song, Vanessa Nolan played Maria, Megan Schoen played Anita, Tristan Kindle played Tony, Royce Strider played Bernardo and Benjamin Vacca played Riff.
The second song performed was “Sull’Aria from Le nozze di Figaro” by Wolfgang Amadeus Mozart. This song was a duet between the Countess, played by Abigail Wise, and Susannah, played by Bethany Hancock.
The third song in the program was “The Doll” from The Tales of Hoffman by Jacques Offenbach. The fourth song was “Journey to the Past” by Stephen Flaherty from Anastasia. This song was another solo performed by the character Anastasia, who was portrayed by Maggie Madonia.
The fifth song was “Musetta’s Waltz & Scene” from La Boheme by Giacomo Puccini. This performance was the second largest in terms of the ensemble as four students took the stage. Wise played Musetta, Nolan played Mimi, Kindle played Rodolpho, and Strider played Marcello. I really liked this song because I found it easy to understand what was happening in the scene.
The sixth song was “Voi Che Sapete” from Le nozze di Figaro by Mozart. This song is the second one of the night from Le nozze di Figaro, but, unlike the last one which was a duet, this song was a solo by Sophia Ives.
The seventh song was “Amor Ti Vieta” from Fedora by Umberto Giordano. This song was a solo performed by Kindle, and he portrayed the character Loris.
Up next was another solo performed by Wise, portraying the character “Butterfly.” The eighth song performed was “Un Bel Di” from Madama Butterfly.
The ninth song in the program was “3 Little Maids From School” from The Mikado by W.S. Gilbert and Arthur Sullivan. This song was the final one that had opera singing involved. I liked this one because the girls used parasols as props and the dynamic was so different from some of the other previous performances because it involved some dancing.
The tenth and final song was unlike any before as it was performed solely by the pianist, Elizabeth Etter. The song was entitled “Die Fledermaus Medley” from Die Fledermaus by Johann Strauss II. This is the song in which everyone came back on stage and bowed.
Magnificent Masks was a beautiful display of incredible music. The performers did a spectacular job, and the performance was one to remember.