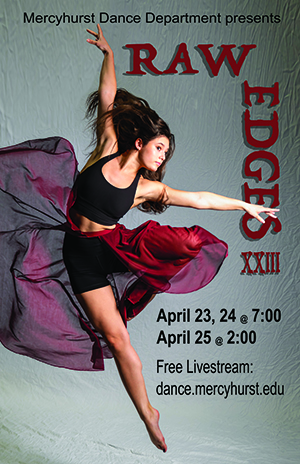 The Mercyhurst University Dance Department has concluded its 2020-21 season with three performances of its Raw Edges concert on April 23, 24 and 25.
Raw Edges is an annual event, which allows the seniors to showcase their best choreography and to dance in pieces choreographed by their fellow seniors and friends.
This year marked the 23rd edition of Raw Edges. Due to COVID-19, no audience was permitted in the Mary D’Angelo Performing Arts Center; in a fun effort to combat this, the dancers filled the seats with balloons to represent spectators and give some semblance of an audience.
The shows took place as normal on the stage, and all three shows were livestreamed for the public free of charge.
Performances took place on April 23 and 24 at 7 p.m. and April 25 at 2 p.m. The livestream link was available on the Dance Department’s webpage, mercyhurst.edu/dance.
As always, the themes of the pieces varied widely and were highly personalized. For example, Annie Browne’s “We Want Our MTV” was a fun flashback to the 1980s, with music by The Buggles, Bon Jovi, Michael Jackson and a-ha.
Meanwhile, Austin Duclos focused on the grieving process with a personal narrative about his late grandfather. This was one of the saddest pieces, but it was beautifully accompanied by moving music and a very clever narrative.
Other students tackled topics including gender stereotypes, domestic violence, hierarchical structures that perpetuate sexism, homophobia, body discrimination, racism and more.
The 11 choreographers began working on their projects in the Choreography III class during Fall 2020 and polished the pieces during their Senior Capstone class this spring.
The dancers are responsible for the entire project, including choosing and researching a theme, selecting music, choreographing the dance, casting fellow students and supervising rehearsals.
The students worked with Dance faculty members Noelle Partusch and Mark and Solveig Santillano, who acted as the executive director and artistic directors, respectively.
Senior Kaitlyn Culp is a dancer in the show for pieces by fellow seniors Rebecca Dunphy and Caroline Schroer.
“I’ve really enjoyed how different the two pieces I had the opportunity to dance in are. One is a musical theater piece about Bonnie and Clyde, and the other is a ballet piece that celebrates the unique differences in dancers,” Culp said.
“The process has definitely been different this year because of the commitment to following COVID protocols, but I’m so happy we found a safe way to share our work with everyone and reach a broader audience than we might have with an in-person audience. My favorite part of the process has definitely been getting to be on the stage again after more than a year with props and lighting and everything.”
In a piece using radio announcements designed to recruit women to join the war effort during the 1940s, Haley Huntley choreographed “Conversations with my Radio,” while Margaret Vivian explored the concept of empathy and interconnectedness in “One Out of Many.”
“The dancers did a beautiful job telling the stories that the senior choreographers were trying to communicate. I loved it,” said junior Music Therapy major Rhyan Komsthoeft.
The performance was undeniably enjoyed by those in it as much as those who watched.
“It was really great to be able to perform on stage again for the first time in over a year, especially for those of us who are graduating,” Christina Milne, senior Dance major, said. “It was a wonderful weekend.”
The talents displayed at Mercyhurst never cease to amaze, and Raw Edges is no exception.
Bravo, Lakers!