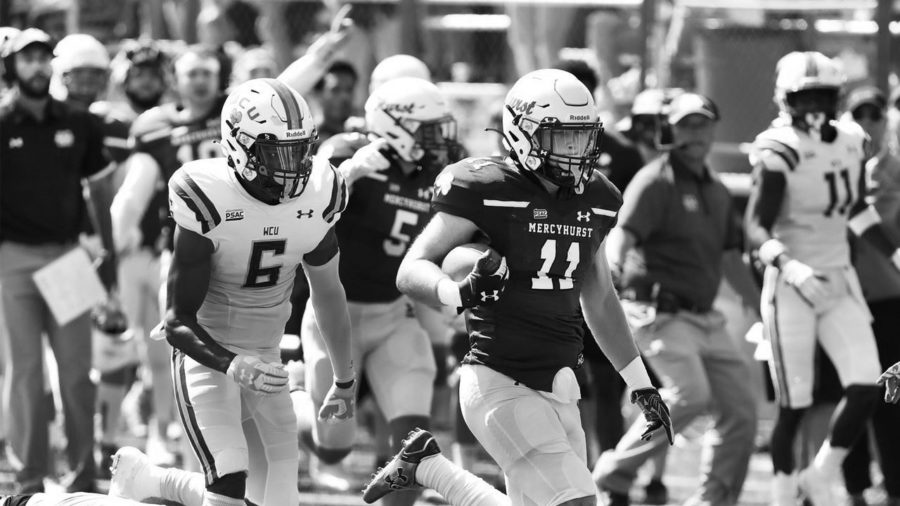 On Sept. 11 at 12:00 pm, the Mercyhurst Lakers football team competed against West Chester University. Unfortunately, the final score did not end in the Lakers favor with a result of 56-10.

“We cannot let last week’s loss tear us apart. To win next Saturday we have to stay together as a team. We have to have More determined attitude and establish a better running game.  This will allow us to mix up the play calls more And keep them off balance,” said assisant coach Tom Herman.

Mercyhurst took the lead in the beginning of the game, but West Chester scored 28 points in the second quarter allowing them to take the lead.

The first score of the game was set up by the Lakers defense. On a third and five for West Chester, Mercyhurst defenceman Ryan Funa got in front of a pass that meant for opponent Desman Johnson and Funa returned it to the West Chester three-yard line.

With the Lakers having the ball at the third and goal, quarterback Michael Lowery was able to find Jason Armstrong for the 11-yard touchdown.

This touchdown brought the Lakers ahead 7-0. However with 13:06 left in the second quarter, West Chester player Phil Poquie had an opportunity for a three yard run tying the game which made the score 7-7.

West Chester then scored a 67-yard touchdown which allowed them to take the lead and changed the score to 14-7 in favor of West Chester.

They continued their scoring streak by getting two more touchdowns in the last two minutes of the second quarter. This pushed the score to 48-7.

Mercyhurst then gained some points on the scoreboard by kicking a 30 yard field goal making the score 48-10.

In the second half of the game West Chester scored 28 more points resulting in a final score of 56-10, and a win for West Chester.

Quarterback Michael Lowery finished the game 14 of 23 for 105 yards along with a touchdown. Chawntez Moss had 39 rushing yards and Jacob Holl had eight tackles.

“We are very fortunate to have an outstanding group of young men to coach.  They are very hard workers and possessOutstanding character.  I am sure that they are upset with how they played and they will bounce back this week agains East Stroudsburg,” said Herman.

The Lakers will take the field next Saturday in East Stroudsburg Pennsylvania at 1:05 pm.