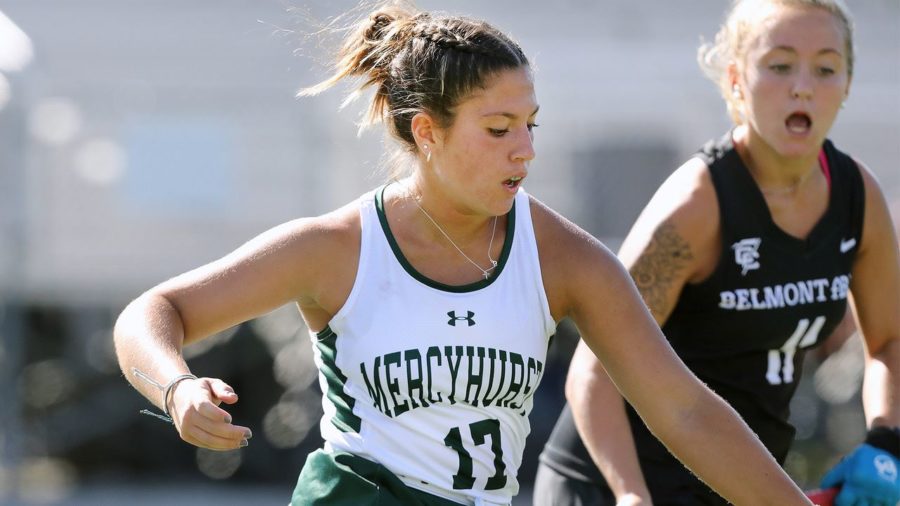 This past weekend, the Mercyhurst field hockey team faced both Belmont Abbey College and Lindenwood University. The Lakers fought hard against their opponents in both games but ultimately fell short of victory twice.

On Sept. 10, the Lakers faced the Belmont Abbey College Crusaders on home turf at 3 p.m., Saxon Stadium. The Crusaders came out swords and shields at the ready putting three goals up on the scoreboard within the first quarter.

Mercyhurst goalie, freshman Kayla Desormeau saved four shot attempts within the first 6 minutes and 30 seconds but was unable to save the fifth shot only six seconds later. By the eight minute mark, Belmond Abbey put another in the back of the net and scored their third roughly within the next three minutes ending the first period 0-3, Lakers.

The Lakers came out determined at the start of the second period with two penalty corners by Mercyhurst senior Alexandrea McDonald in the fifteenth and nineteenth minutes. Mercyhurst was also able to get in two shot attempts before Belmont Abbey scored again in the twenty-first minute making the score 0-4, Lakers.

Shots were by junior Alexis Lovewell and freshmen Fenna Klok. By the end of the second period, the Crusaders scored for what would be their final time adding one more point to the scoreboard.

Fortunately after the second period, the Lakers were able to hold off the Crusaders for the rest of the game. Mercyhurst was able to put up eight shots throughout the entire match with three on target. Senior goalie, Libby Jones, was  also able to save three shots against the five that she faced. The final score of the Belmont Abbey game ended in a 0-5 loss for the Lakers.

With a quick turnaround time, the Mercyhurst Lakers traveled to St. Charles, Missouri for play Lindenwood University for their first away game on Sept. 12. With Jones as starting goalie for the first away game, the Lakers faced the Lindenwood Lions.

Another hard-fought match, the Lakers held off the Lions until the very end of the first when one was able to slip through the net with 1:47 remaining on the clock. Unlike the Belmont Abbey game, the Lakers held down the fort and kept the score 0-1 for the second quarter despite nine shot attempts which were all saved by Jones.

In the third, the Lakers played a strong defense with Jones at the helm and were able to keep the points away from the Lions. With a single corner in the period, the Lakers narrowly missed the goal on this golden opportunity.

The fourth quarter is where the tide seemed to begin to turn at the end for Mercyhurst. Two minutes into the quarter Lindenwood scored once more after two more shot attempts. After back and forth possession, Mercyhurst sophomore Jenna Cavalieri was able to gain possession for a fast break. Cavalieri passed to junior Sarah Vosburgh at the last second who was able to turn and score with 34 seconds remaining in the game. The end result was a 1-2 loss for the Lakers.