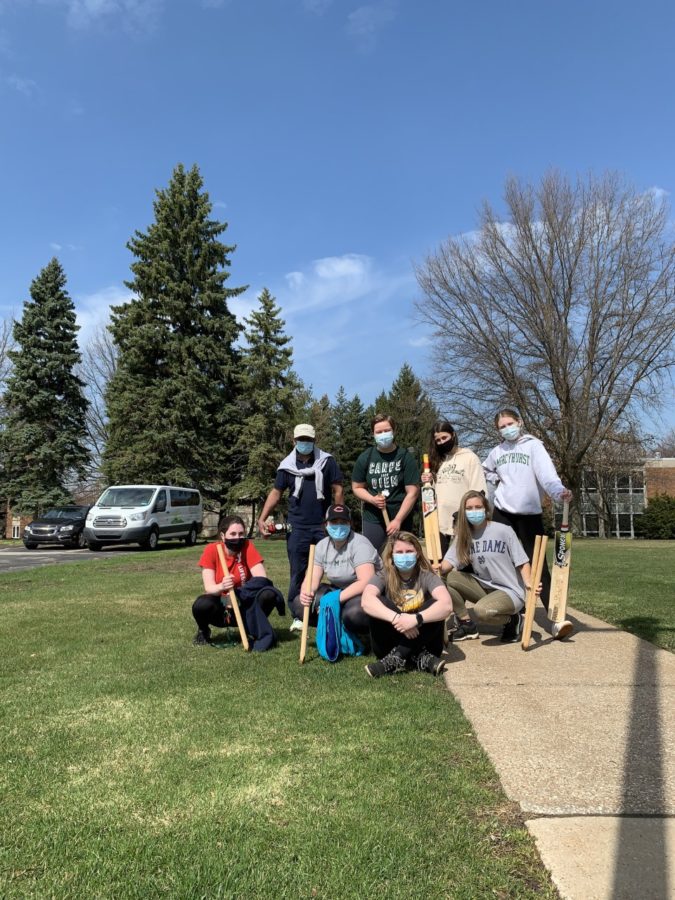 Are you interested in trying something new? Would you like to learn an interesting and unique game? If so, come check out Mercyhurst’s new Cricket Club.

Cricket is a type of bat-and-ball game that is often played with two teams of eleven players. Similar to baseball, each team takes turns batting and playing the field. Although in cricket, the batter is referred to as a “bats-man” whereas the pitcher is referred to as a “bowler.” The goal of the game is for the bowler to knock down the bail of the batsman’s wicket. The first known game of cricket has roots in 16th century England but holds popularity in some places in Southern Asia. While the sport is not as common in the United States, the university is excited to be getting a taste of this unique sport to some degree. According to the International Cricket Council (ICC): there are twenty-two national teams all over the world. New Zealand currently holds the top rank in the ICC league. The United States may not be a part of that lineup, but with cricket clubs across the country like our own, we can one day hope that there will be.

Cricket Club was recently introduced to the university as of last semester however, it did not make its formal appearance until this Fall. Junior Forensics Major and President Kaitlyn Strocio is incredibly excited to have the club up and running. Strocio was first introduced to cricket last spring by Assistant Professor of Biology and current club advisor Rajinikanth Mohan, Ph.D.Thus far, the club is running strong. Strocio is incredibly passionate about her role as president. “My goal for the club is to cre-ate a judgment-free environment where anyone can feel comfort-able playing cricket,” said Strocio. “We are accepting of all students of all skill levels and first-time players,” she continues.

Currently, the club has had an exceptional turnout with eager students eager to learn all about cricket. The club is currently home to thirty-four students with an average of fifteen showing up for weekly meetings. While the game is usually played with two teams of eleven, the club has managed to adjust accordingly.

The club is enthused about its number of returning students but, is happy to have welcomed fresh faces as well. “My favorite part of the club is the niche community we’ve made in such a short time. The more experienced members have been very welcoming of our new members and they are so patient and encouraging,” said Strocio.

The club is off to a great semester and is slowly growing. This semester the club hopes to have proactive weekly meetings and continue to master the game of cricket. The club is always welcoming of new members and is enthusiastic to teach Mercyhurst all there is to know about this unique sport. “I am proud of this club and I hope to see them continue to grow as cricket players and com-passionate individuals. If we can get more members we will defi-nitely consider planning various events for more students to par-ticipate in,” said Strocio.

Anyone interested in learning more about Cricket Club can reach out to Strocio or Sophomore History major and Cricket Club Secretary, Eva Phillips. “Cricket Club is a great way to make new friends and try some-thing new without the stress of being judged,” said Strocio.