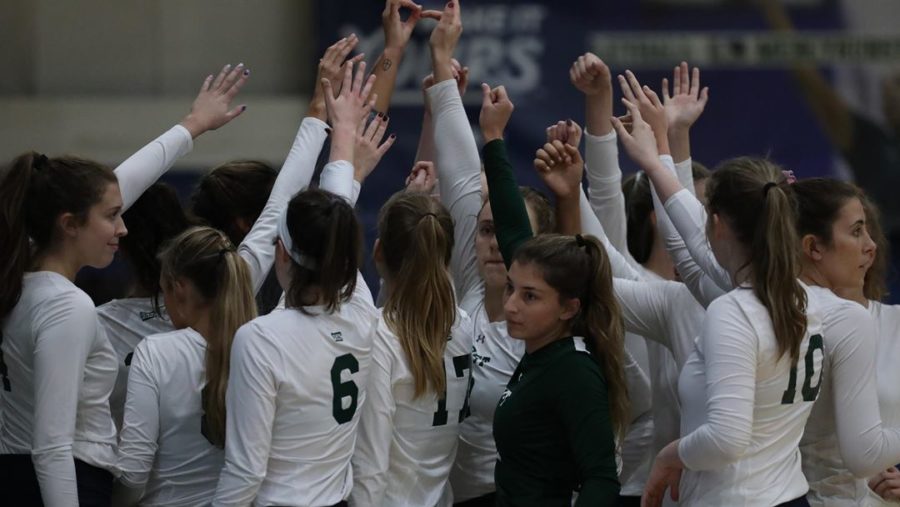 The Mercyhurst volleyball team traveled to West Chester, PA over the weekend to take part in the Ram Fest tournament which was hosted by West Chester University.

The Lakers had four matches over the weekend with two on Friday and two on Saturday. The tournament did not start out as well as they had hoped on Friday, as they were unable to pick up wins against Jefferson and Millersville.

The Lakers fought hard but lost both sets by a score of 3-1. Head Coach Ryan Patton said, regarding the Jefferson match, that the team “had some non-volleyball things to deal with and we didn’t deal with them well enough. We did some okay things in the match, but not often or consistently enough.”

In the Millersville match, Mercyhurst started out well by winning the first set but were unable to close it out.

Mercyhurst bounced back and found their stride on Saturday though as they were able to win both matches. The team beat Goldey-Beacom and West Chester University to close out the weekend.

The Lakers fell to a 2-1 start in the first match but came back to win the next two sets decisively. Beth Brady, Madison Kasper, and Hailey Wilson led the offensive attack with 11, 9, and 9 kills respectively.

In the West Chester match, the Lakers had their best effort of the weekend with a 3-1 win. Patton had this to say about the win, “we’ve had three weeks of good practice, and this was the match where our play finally represented what we’ve been doing as a team. We were aggressive, strategic and executed as we should all year.” Coach Patton also spoke highly about all his players, specifically Beth Brady, Hailey Wilson, and Hannah Vuylsteke.

They dominated all 3 aspects of the game over the weekend with Brady who “had a great offensive weekend, routinely hitting us out of trouble and carrying the offensive load for long stretches.” Brady had 15 kills in the second match. Wilson also played extremely well as she “did what we hope from her stepping in where need and producing. Her serving was especially a highlight this weekend.”

Wilson also had 14 kills in the second match. Finally on defense, Vuylsteke led the charge as she “covered the court and kept the ball off the floor like we’ve come to expect from her, she’s pretty special with what she can do on offense.”

Vuylsteke was able to pick up 27 digs to lead Mercyhurst. On the stat sheet, the second match was certainly a team win as Maggie Thomas also contributed 10 kills to the winning effort. Madison Kasper and Thomas were also able to get four blocks each as well against West Chester.

Alex Mitchell and Isa McCaffrey both set well with 43 and 39 assists respectively between the two matches.

The Lakers will be back on the court on Friday when they travel to Walsh University for another 4-match tournament called the Cavalier Invitational. With Walsh University being in North Canton, Ohio, it will be another long trip for the Lakers.