Hurst football starts the season with a win 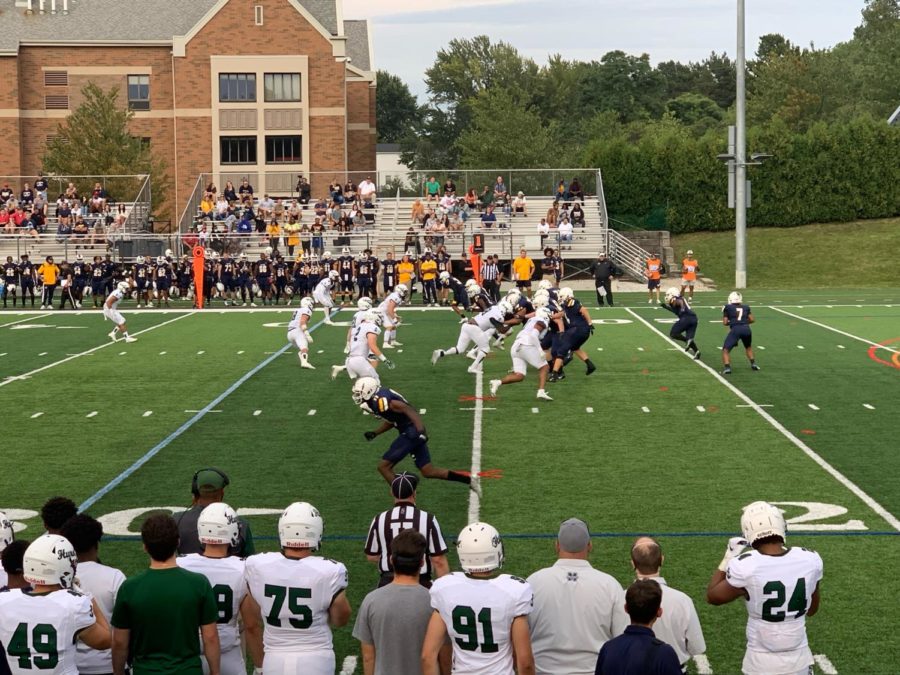 Mercyhurst Laker football is back, baby! It has been 136 days since our men in green have taken the field to play the game they love. That could also be counted as 19 weeks or 3264 hours or 195,840 minutes or 11,750,400 seconds. Whichever way one wants to look at it, it’s been a while. However, it has been 673 days since The Lakers have stepped on home soil in Saxon Stadium. This past weekend was the first game to kickoff the Mercyhurst Football season on our own turf.

Since 2019, our men have only played two football games. The last game played on home ground was a winning game on Nov. 2, 2019, against Gannon University. Little did the players know that it would be almost two years before they played on the Saxon field again.

This moment was very special for many. Players, coaches, parents, and fans all gathered in Saxon Stadium to watch our Lakers take on Alderson Broaddus for the first time.

“I’m most excited to watch our players play. They have worked hard for this moment” said Head Coach, Marty Schaetzle, when asked about what most excited him about this upcoming game/season.

The game started off with Mercyhurst Defense putting on an incredible show. Holding the Battlers at only 86 yards and seven first downs. Senior, Bradley Burrows, lead with ten tackles which included four sacks.

The Mercyhurst D-line was a force to be reckoned with this Saturday with Burrows but also many other defensemen. Senior, Thomas Zacharyasz, came second with 5 tackles to start his first game of the season. Seniors, Ryan Funa, Jacob Holl, and Graduate Student and Captain, Jehrod Gregory each put Broaddus players to the turf with 4.

With the first 15 minutes under the Lakers belt, the score still stood at nothing. However, this wouldn’t last long because Burrows stipulated a grounding call upon opposing Jaylen McNair of Alderson Broaddus with only 7:19 left on the clock

Junior, Brian Alsobrooks, bagged two field goals in the final two minutes of the first half which would knock the score to 8-0 for the Lakers as they exited the field.

The Lakers came out of the locker room with a bang as they continued to gain yards at the start of the second half.

Junior, Michael Lowery, was a star with his 5-for-5 in 39 yards which included a three-yard pass to sophomore, Sean Banas to score the Lakers a touchdown. With Alsobrook’s field goal, this notched the score at 15-0. Alderson Broaddus still at nothing.

Lowery would finish the game with 274 yards, 24-of-36, and a touchdown pass. “My main motivation going into this game was establishing myself as a college quaterback and proving to myself that I belong here at the next level,” Lowery said. “I think I played decent, I played better than I thought I was going to after not playing in two years and not playing an actual full game in three years but it felt good being back on the field!”

However, Broaddus would get on the board only a couple minutes later with a 25-yard field goal from kicker, Austin Hampton.

With a field-goal from Alsobrooks, this would cement the score in favor of the Lakers for the rest of the game, ending with 18-3.

The Lakers are back to work in Saxon Stadium on Saturday when they host West Chester at 12 pm. See you there!