Start of a season for men’s soccer 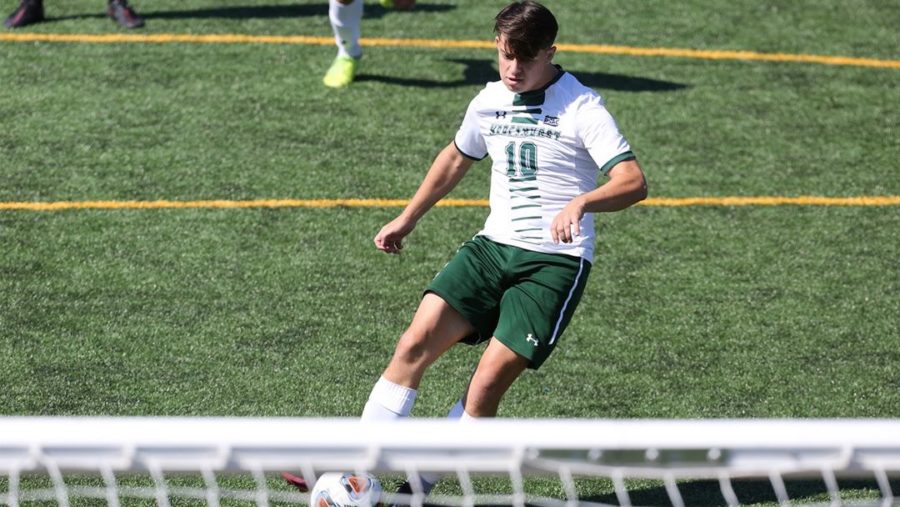 On Thursday, Sept. 2, the Mercyhurst Men’s Soccer team had their first game of the season. The game was the first of the season to be played at home on the Mercyhurst Soccer field. At 2 pm, the Lakers faced West Liberty University in the first of their four non-conference matches of the season. Two of their other non-conference games will take place before their regular season starts in the PSAC (Pennsylvania State Athletic Conference.) The Lakers lost their first game this season to the Hilltoppers with a final score of 3-1.

After COVID-19 canceled the team’s season in the fall of 2020 and a small six-match exhibition in the spring of 2021, the men’s soccer team can have a mostly normal season with a full schedule this coming fall. The Lakers face some pressure going into their season as they went 6-0 in the exhibition in the spring, so they will have to work hard to maintain a good record.

The Lakers have not played a proper game with a crowd in 657 days (about 2 years.) In addition to allowing people to watch from the stands, the game was also live streamed for those who could not make it.

The Hilltoppers scored all three of their goals in the first half. Mikel Ubeda scored soon after the first half started at 8:54 with an assist from Adam Lynch. Their next goal came about twenty-five minutes later when Vitor Otsuka scored with help from Daniel Rovira. Their third goal came just six minutes shy of halftime as Adam Lynch scored his first and only goal of the game unassisted.

Mercyhurst’s lone goal came less than ten minutes into the second half when Sidney Warden took a penalty kick and scored.

The Lakers outshot the Hilltoppers 14 to 7 but were not able to convert the shots into goals. Jonathan Gomes, goalkeeper for Mercyhurst, had three saves during the game.

Ryan Osborne, Head Coach of the Mercyhurst Men’s Soccer team, just started his first full season with the Laker’s after being hired right before COVID-19 hit. Osborne is hopeful for the season after the first game did not go the way the Mercyhurst team wanted. “We are excited by the group we have. We have a lot of quality and I truly believe that we will only get stronger as the season progresses,” says Osborne. “We will continue to work and look forward to building again.”