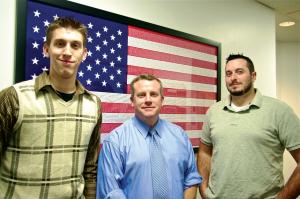 Zach Dorsch photo: Senior Tim Hudak, Assistant Professor Stephan Zidek and junior James Oefelein started the Veterans of Mercyhurst Club to support veterans enrolled at Mercyhurst and in the community.More than 100 veterans call Mercyhurst College their home. The Mercyhurst Veterans Association (MVA) is a new group on campus that offers support to those veterans in the student body and on the staff of Mercyhurst College.

“We have been talking about forming a veteran organization for some time, and I think we can all agree that it was long overdue,” said senior Timothy Hudak, the president and co-founder of the MVA.

Hudak served five years in the Marine Corps as an intelligence specialist.

“Veterans of Mercyhurst recognize each other pretty easily, be it hair, lingo or some boots. We have an informal network and a lot of us stick together,” Hudak said.

This association gives the veterans of Mercyhurst an opportunity to formalize that network.

The faculty adviser for the MVA is Assistant Professor Stephan Zidek.

“Making the transition from military life, doing combat missions in Iraq and Afghanistan and then coming to Mercyhurst can be very surreal,” Zidek said.

One of the official missions of the MVA is to ease the transition into college for veterans who have seen active duty.

“We need a support structure for veterans coming to Mercyhurst,” said Hudak. “Many combat veterans struggle with PTSD or have other scars both physical and mental. It can especially take its toll when you realize you have no one to talk to. The 18-year-old sitting next to you in class is not going to understand or even comprehend.”

Support for veterans will be offered in the form of group gatherings and educational speakers.

“It is our intent to have a monthly meeting of sorts. We plan to do some outings together, such as an Otters game or a BBQ,” said Hudak. “We are also planning to have some VA experts come in, such as a VFW representative or a VA doctor to explain to the veterans their rights and benefits as veterans.”

Providing support for campus veterans is not the only thing the Mercyhurst Veterans Association seeks to accomplish.

“The other element of the Association is an external mission,” said Zidek. “We want to help the veterans of the Erie community.”

In the near future, Zidek plans for the MVA to coordinate with the many veteran groups around Erie. As part of this effort, the MVA also has plans to get involved in the annual Toys for Tots charity campaign that is managed by the United States Marines.

The MVA is open to all students and faculty who have served in the military. For students who have not served but would still like to support the organization, an “associate members” program is offered.

Students who are interested in joining the MVA or would simply like more information can email co-founder James Oefelein at joefel62@lakers.mercyhurst.edu.