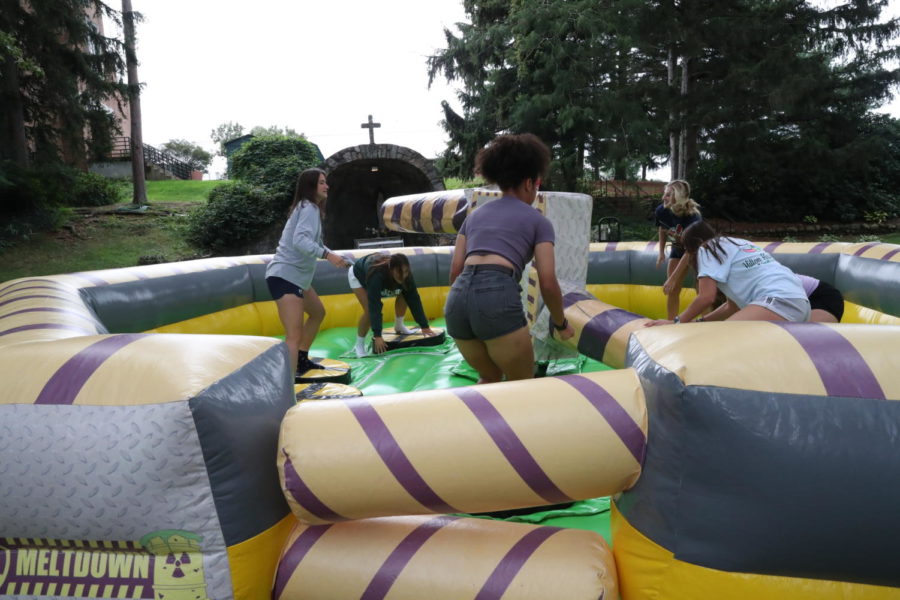 With an updated logo and a new president, Hurst Day once again returned for all Mercyhurst students on Sept. 13. One of the most looked-forward to traditions, the Mercyhurst community was finally able to come together again for a day of fun and festivities.

Hurst Day began in 2015 under the Presidency of Michael T. Victor and became such a cherished day that it looks like it will continue well beyond his time at the Hurst. The soon-to-be inducted President Getz welcomed the “Hurst Holiday” into her presidency and chose the day to mingle and help host the day’s events.

A muggy Monday morning, students were awoken to the sound of bagpipes as the bagpipers marched all throughout campus with Luke the Laker. Starting with the raising of the Hurst Day flag in Old Main drive, they marched to and from all the freshmen residence halls as well as Duval and Ryan to wake up students for the day.

Costumed groups participating in the scavenger hunt once again filled the Mary Garden at 10 a.m. after an entire year without the beloved Hurst Day. With classic themes such as Scooby Doo’s gang to new and creative ones such as Rock ’n Roll Bowlers, a record number of 140 groups of four sprinted all around campus to get through the three different rounds of the scavenger hunt.

The top three winners ranking from third to first, included: Monster’s Inc. Code 1926, The Jazzercisers and the Hurst Day Heroes.

Junior Music Therapy major, Kaitlyn Morris was a member of The Jazzercisers group and was able to place second. “I participated my freshman year but gave up after the first clue… this year I felt way more prepared after pledging for ambassadors, being a Laker Leader and having three RAs on my team,” said Morris.

Once the scavenger hunt was completed, all students were welcomed to join in on the Hurst Day festivities. Free Hurst Day shirts were handed out to students who did not participate in the morning scavenger hunt in front of the Student Union at noon.

From free food, music, giant inflatables and more, the heart of campus was filled with students,

faculty, staff and even some children and dogs.

“The rest of my Hurst Day was fantastic,” said Morris, “my team and I were on the top of the world and went to go celebrate in proper fashion— with Parkhurst video game food and bumper cars.”

The festivities for the day finally concluded with Parkhurst’s steak dinner at the Grotto Commons and Ryan Hall’s 501 Grille which began at 5 p.m. Although the dinner was not free, students with meal plans were able to swipe in or use cash to pay.

Despite the previous fact, the dining halls were filled with students all evening who came to enjoy the steak meal.

Even though students went without a Hurst Day last year, one can safely say that this year was a success. The spirit of Hurst Day filled all of campus with cheer and Laker pride. Students can’t wait till Hurst Day arrives next year!