Jill Barrile photo: Mercyhurst Ballet Theatre is made up of a small group of talented dance students.This past weekend Mercyhurst Dance Theater, in collaboration with SoMar Dance Works, presented its fall show “Beyond Words” in the Mary D’Angelo Performing Arts Center.

This breathtaking series of scenes captures the imagination of the viewers and takes them for a ride that only true masters of the art can provide.

Sophomore Drew Klobuchar said after he attended Saturday’s performance, “the dance was very captivating as my imagination was taken for a ride ‘beyond words.’”

“It was also very exciting to see my dance teacher perform with elegant beauty and grace,” he said.

The goal of the Mercyhurst Ballet Theatre (MBT), created by dance chair and faculty Tauna Hunter and Michael Gleason, is to challenge a small group of extremely talented Mercyhurst dancers.

This was MBT’s first local performance, and the eight elite Mercyhurst dancers featured in this ensemble will represent the college at performances in local schools and tours in Pennsylvania, New York and Ohio.

For this particular performance, MBT was joined by the talented Justin Koertgen of Dayton Ballet. Kortegen joined the group in the opening act for a dance titled “…de un corozon roto,” choreographed by Thom Clower.

He also joined them for a beautiful duet titled “The Proposal.” Emily McAveney was featured in the matinees and Anastasia Welsh was featured for the night performances. The dance was choreographed by Koertgen. 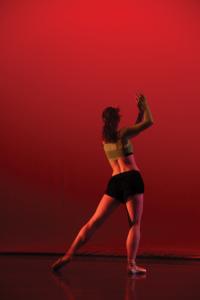 Jill Barrile photoWithin this wonderful performance were three world premiere pieces, including “Absence of Opinions: The Mourning of 9/11,” which is quite an emotional piece set to the music of Dmitri Shostakovich.

This was a visual representation of that historic day, and as the events unfolded on the stage chills ran up and down the spines of those in the audience.

The second piece was “That Which Lurks When Shadows Fall” with music by Combustible Edison, which was a great choice of comic relief after the heaviness of the 9/11 piece.

It exhibited the fears of a little girl as she is dragged under her bed by monsters. As the Halloween-esque music played in the background, the little girl learned that the monsters weren’t as scary as they appeared, and they became friends.

The Last of the premiere pieces was “Duet: A Case Study” set to music by Mercyhurst professor of music Scott Meier and wonderfully choreographed and performed by Solveig and Mark Santillano.

“I think that the ‘Beyond Words’ performance is a great opportunity for people to get to see the wonderful talent in SoMar dance works and Mercyhurst ballet theatre,” said sophomore Rachel Bauer. “I don’t think most people know that this talent exists within the dance department.”

This is the type of performance any department would be proud to see on stage.