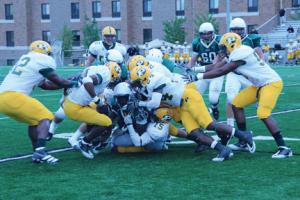 Jill Barrile photo: Injuries and a run of bad luck keep piling on the Lakers. despite a promising 3-1 start, the team has lost five straight.When the Mercyhurst football team began the 2011 season, the players had expectations of defending their Pennsylvania State Athletic Conference West Division crown.

After losing their fifth straight game and falling to 3-6 overall, those expectations have calmed.

“This season has been just as unique as last year, just a different road,” Coach Marty Schaetzle said. “Last year everything fell into place.”

This season everything has fallen apart.

The team started out with a promising 3-1 start, but as they hit the toughest stretch on the schedule, nothing seemed to go their way.

During the five-game losing streak, the Lakers have had a chance to win each game. Only one game was decided by more than a touchdown — a 10-point defeat to Edinboro. Two other games needed overtime to decide a victor.

“I have never had a season where so many games followed the same script of playing good football and not finishing games,” Schaetzle said.

Last year’s team was able to make the critical plays to win the games, but this team has just missed these opportunities.

“Part of it is experience,” Schaetzle said. “We can pull out one play from three games that if we fixed that mistake we would’ve won the game.”

Those critical plays are not limited to just one side of the ball either. With senior quarterback Travis Rearick out for the season with a knee injury, sophomore Anthony Vendemia has stepped in admirably in his absence.

Unfortunately for Vendemia and the Lakers, he stepped in against the four top defenses in the PSAC. Even against the stiff competition, Vendemia has led the Lakers to 386 total yards a game, which is No. 6 in the conference.

“When Travis stepped in last year, he had plays behind him already, but Anthony has put us in a position to win each week, and his experience will pay dividends in the future,” Schaetzle said.

The 2011 Lakers are a young team with a few upperclassmen scattered throughout. Senior linebacker Ian Wild has led the defense with 90 tackles, 12.5 tackles for loss, seven sacks and five forced fumbles on the year.

Unfortunately, Wild has had to battle an injury that kept him out against California (Pa.).

Senior receiver Trevor Kennedy has continued to light up the record books and the scoreboard. Kennedy has added to his school record 15 touchdowns and has 1,114 yards on the season.

Despite these seniors’ best efforts, their experience has not been enough to carry the load.

“The younger guys have learned from the seniors what it takes to get to that next level,” Schaetzle said.

The experience the younger players have earned this season will certainly pay off in the years to come, but no one is ready to start looking ahead to next season.

“Our main goal is still to get the players ready to play on Saturday and to work hard during the week,” said Schaetzle. “They have worked extremely hard all season.”

The Lakers have two games, both on the road.

“We have two opportunities left to work hard,” Schaetzle said. “This season has been a perfect storm the wrong way.”