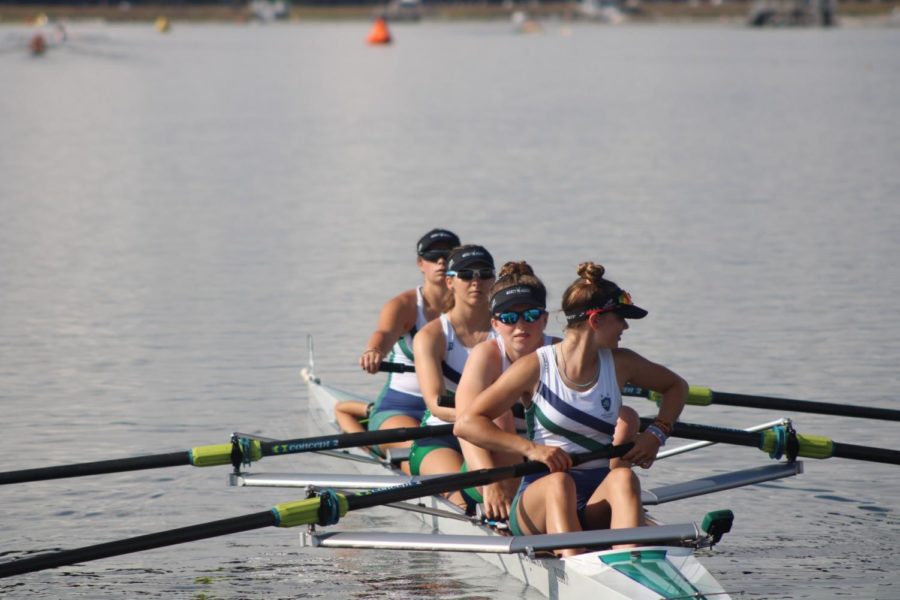 While students, faculty, staff and alumni celebrated with differ-ent Homecoming festivities back on campus, on Sept. 26, the Mercyhurst rowing team headed to Findley Lake, NY for one of their four regattas of the year. A regatta is a series of boat races and typically describes racing events of rowed or sailed water-crafts but can also include power-boat race series. Hosted by Mercyhurst at the Gillard Rowing Center at Findley Lake, the MU teams raced in the Findley Lake Autumn Classic.

This regatta celebrated Mercyhurst’s 50th year of rowing at the Hurst during Homecoming Weekend. “This regatta was a great success not only with the quality of the racing and results, but for the alumni that had re-turned for the 50th anniversary celebration. It was especially great to see the members of the first ever crew come home and cheer on the current team,” said Mercy-hurst’s Director of Rowing, Adrian Spracklen.

Both Mercyhurst Men’s heavy-weight and lightweight rowing teams competed along with the Mercyhurst Women’s rowing team. The Mercyhurst University Lakers competed against schools such as the Rochester Institute of Technology (RIT) Tigers, the Penn State Behrend Nittany Lions and the Marietta College Pioneers.

The Lakers came out strong at the regatta with the men’s eight races winning with a final time of 22:19.67. With two boats in the race, the Lakers’ second boat came in third with 23:17.02 for a final time.After the race, the women’s team, the NCAA Division II National Runners Up, got to go in the water for the first time in the 2021 season.

The women’s eight won first place with a final time of 25:43.39. With this time, the Lakers defeated two RIT boats and a Marietta and Penn State boat. Men’s varsity then completed four races and finished with a final time of 25:34.58 defeating both the Pioneers and the Tigers to take the first-place title. In the M1X race, the Lakers closed out the first flight to take second place.

The women then raced again in the fours race and were able to beat two Marietta boats and two Penn State Behrend teams with a total time of 32:09.66. The Laker’s second team finished over a little over a minute after the first team, earning themselves second place.

“The racing was fun, competitive and an overall success. A big thank you to Marietta, RIT and Penn State for making the trip and for such a great experience for all. We had many wins including all the varsity sweep events which pleased the home crowd,” said Spracklen.

Mercyhurst was supposed to race on Oct. 9 at Howard, PA for the Nittany Lion Chase regatta, but it now shows that it has been canceled on the HurstAthletics.com website as of Oct. 5. The Lakers’ next race is set to be another all-day regatta on Oct. 24 in Boston, MA for the Head of Charles Regatta.