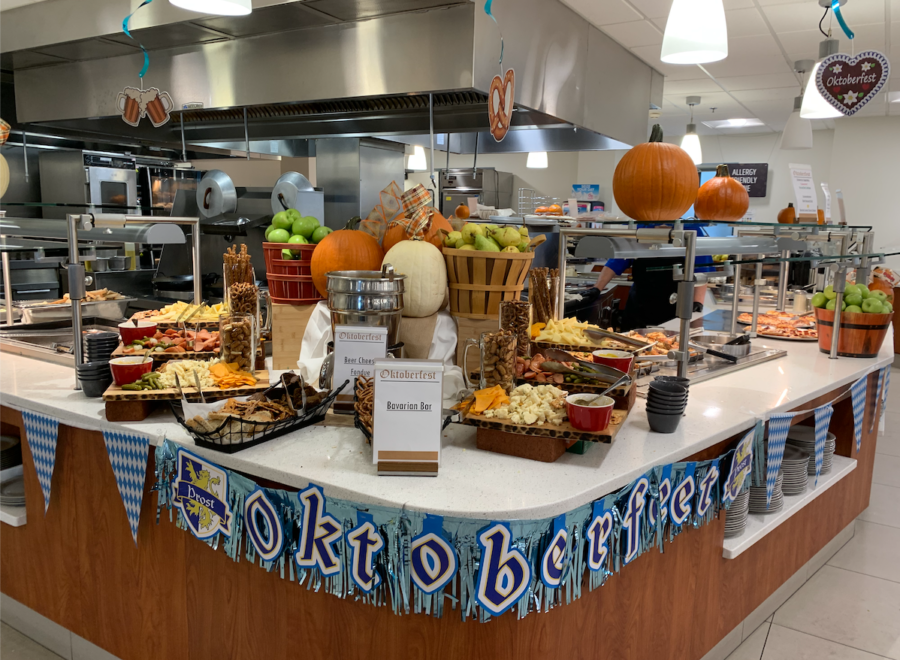 Each year Mercyhurst Din-ing hosts a variety of themed meals to excite and engage students in the dining experience beyond just the food.

Parkhurst general manager, Katie Boyd, works with her staff to plan each themed lunch or dinner meal to be a fun, nutritious and exciting meal that everyone can look forward to.

On Oct. 13, Mercyhurst Dining held an Oktoberfest lunch in 501 Grille in Ryan Hall. The event featured typical Oktoberfest foods such as bratwurst, root beer and of course — soft pretzels and beer cheese.

“Some of my favorite parts of Oktoberfest were the large amount of charcuterie board options such as mustard, meats, cheeses, pickles and olives. There were plenty of pretzel options such as pret-zel buns and regular pretzels served with cheese. They also provided apple cider and root beer to finish off a delicious meal,” said senior early childhood and special education major Madison Byers.

Apple Fest was held on Oct. 21 in the Grotto Com-mons Dining Hall. Naturally, this event featured a variety of apple-themed foods fit to put anyone in a fall mood. Apple cider, apple fritters, and even apple pizza were among some of the apples treats available for patrons to try.

“I really liked how you could go ‘apple picking’ right from the comfort of our own din-ing hall! I enjoyed collecting and trying a small assortment of different apples and apple-themed dishes,” said freshman dance major Gabrielle Harris.

This event excites more than just students – faculty and staff often look forward to having a special lunch from Parkhurst during the workday.

“One of the mainstays we’ve come to look forward to from Parkhurst is their various themed lunches throughout the year,” Enrollment Data Scientist/Web manager Kyndra Zacherl said, “There’s no better way to prepare for a holiday – or just savor the taste of apples – than to partake in a festive lunch in Grotto Commons.”

Those who have not attended any themed meals may not know this, but Parkhurst employees enjoy these meals almost as much as the people they serve. They are often seen in fun costumes and love to dress up for any themed event. During Apple Fest staff dressed up as farmers and during Oktoberfest one staff member was sporting traditional lederhosen.

Mercyhurst Dining is also known to use a wide variety of locally grown produce in their dishes, especially at “The Stand” often featured in Grotto Commons.

The Stand is a specialty pop-up food area that is also often themed with healthy dishes to encourage students to try new, locally-sourced foods. So far this semester, The Stand has presented pop-ups on stress-reducing foods such as leafy greens and even more fall flavors such as pumpkin and squash.

While some of the fun fall-themed meals have already passed, there are many others to look forward to in the coming months. Halloween lunch, Thanksgiving dinner and Christmas dinner – some of Parkhurst’s most extravagant events of the year – are still to coming up before the end of the semester.

The dining halls aren’t the only ones that have themed foods. For example, this month at the Starbucks Cof-fee Bar in the bookstore, they have featured fall and Halloween-inspired beverages such as the classic pumpkin spice latte, the “eerie fog” tea, and even a “Count Chocula Frappuccino.” “The Count Chocula Frap-puccino was awesome – I don’t usually drink coffee but the theme was so fun I gave it a try. I then told a bunch of my friends in my next class about it,” senior forensic science major Abby Springer said.

Next time you visit one of the dining halls or coffee bars on campus on these special days, be sure to say an extra thank-you to the workers who put in the time, effort and enthusiasm to ensure a fun dining experience for everyone here at Mercyhurst.